The President’s spokesperson has told people to forget about Duterte’s jokes, which were described as “inappropriate” by critics, adding let’s not be like Americans who “give deeper meaning to everything.”

Speaking on Thursday, Presidential spokesperson Harry Roque told the media that people should stop overthinking the sex jokes made by President Rodrigo Duterte, adding that the veteran leader isn’t going to change.

Roque comments come after the Commission on Human Rights (CHR) condemned the president on Wednesday for making misogynistic remarks and objectifying women.

Let’s not give too much meaning to the jokes of the President. That’s just how the President is and he cannot change anymore because he’s already in his 70s. But his jokes have no malice.

The President’s spokesman was dismissive of the criticism and called on people not to take the leader’s remarks too seriously.

My request is, let’s not be like the Americans. Americans give deeper meaning to everything but here in the Philippines, let’s take a joke for what it is — a joke

Duterte’s heavily criticized remarks were made in mid-October and at the end of a situation briefing about Typhoon Ulysses, which killed at least 67 and caused extensive damage.

Roque previously said that Duterte was just trying to lift the mood as he claimed his former classmate from law school, had grown “old” from constant womanizing. It was reported that Durterte also joked that someone who had recently died from coronavirus actually passed away because he had been “deprived of women.”

On Wednesday, as the world marked the International Day to End Violence Against Women, the CHR Commissioner Karen Gomez Dumpit slammed the President’s jokes.

“We cannot let pass these sex jokes and sexist remarks without exercising our constitutional mandate to advise the government in the fulfilment of its obligations,” she said, condemning “the normalization and trivialization of sex jokes and sexual objectification of women.” 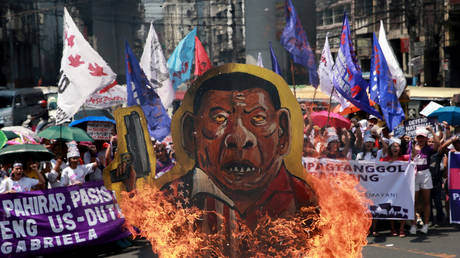