All ballots have been counted in the Peru presidential election, with Pedro Castillo winning by just over 44,000 votes. His opponent, rightwing Keiko Fujimori, would not concede, hoping to flip the election in a legal challenge.

The final count released by Peru’s election authority on Tuesday gave a narrow victory to the rural teacher and union organizer. Castillo won 50.125% of the vote, beating Fujimori by just 44,058 votes. The June 6 run-off had a turnout of almost 75%, with some 18.9 million people casting ballots.

But even as Castillo promised a new age of justice and dignity for the country, his claim on presidency remains challenged. Fujimori, who refused to acknowledge defeat, told supporters to not be confused by the result and wait for the procession of the challenges of the count she had filed.

Last week, after an ongoing ballot count erased her initial narrow lead over Castillo and indicated his eventual victory, Fujimori alleged that there was election fraud, offering no evidence. She hopes the election would flip in her favor, after some of the votes cast for her opponent are annulled. Both domestic and international observers contradicted her claims, certifying the ballot as fair.

After Castillo’s Twitter account changed his bio to ‘president-elect’, many of Fujimori’s supporters rushed to likewise declare themselves as elected presidents – or in some cases the ruling monarch of a ‘Peruvian Empire’. The hashtag #CastilloChallenge trended on Twitter in Peru, with some well-known public figures, like former Justice Minister Salvador Heresi joining in.

Yo también me uno al #CastilloChallenge

The likely presidency of Castillo however is no laughing matter for the Peruvian elites unnerved by his socialist platform. According to Reuters, many of the richest and most powerful people in the country have been withdrawing their money out of the banks and spreading property rights among family members, fearing possible expropriations. Banks had to import physical dollar bills to meet the demand.

On his campaign trail, Castillo galvanized the support of the poorest part of the population, promising help through social programs. He said he would raise taxes on the mining industry to fund those programs and suggested he may seek constitutional reform to give the government more power to regulate the economy. Critics call him a Marxist and warn that his rule would lead to ruin.

Meanwhile Fujimori is a devoted neoliberal and political torchbearer for her father, former President Alberto Fujimori. She has the support of the wealthier urban population and the business community. The vote, which was Fujimori’s third bid to become president, was widely perceived in Peru as a definitive choice of the country’s future, polarizing society.

Former President Fujimori is currently serving a prison term for corruption and violation of human rights during his tenure. His daughter is under a corruption investigation herself and has spent about 13 months behind jail between 2018 and 2020, before being released on parole. Last week a prosecutor demanded her return to pre-trial custody, accusing her of witness tampering. 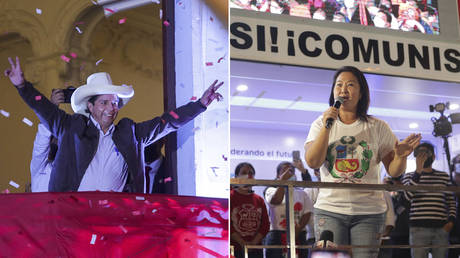