The US and its “international partners” will offer financial aid to Lebanon, which is struggling to deal with the economic fallout of the massive port blast — but only if it commits to “real change,” a senior US official said.

US Under Secretary of State for Political Affairs, David Hale laid out Washington’s conditions for aid as he spoke in Beirut on Saturday. The senior diplomat was on a three-day trip to the Lebanese capital.

“When we see Lebanese leaders committed to real change, change in word and deed, America and its international partners will respond to systemic reforms with sustained financial support,” Hale said. He also called on Lebanon’s leaders to heed the “longstanding and legitimate” demands of people and to rein in corruption.

Aside from the call for fundamental reforms, the diplomat also signaled that the US government was ready to work with Congress to pledge up to $30 million to enable the flow of grain through the Port of Beirut on an urgent basis. Among vast swathes of the city, the blast heavily damaged the city’s main grain elevator, rendering a large supply of grain inedible.

The explosion was caused after a massive stockpile of ammonium nitrate caught fire. The catastrophic blast which killed more than 200 people and left thousands injured sparked major protests in Beirut after citizens blamed the government for storing the highly explosive chemical there for years without proper safety precautions and oversight.

Lebanese PM Hassan Diab announced the resignation of his entire government last week, blaming the blast on endemic and “systemic” corruption. His resignation President Michel Aoun who asked the government to stay on in caretaker capacity until a new one can be formed.

Earlier this week, Hale also revealed that the FBI will be involved in the probe into the blast to help figure out “what led to the circumstances of this explosion.” The aid of the US agency was requested by Lebanese authorities and the operatives are expected to join the team of international and local specialists shortly. 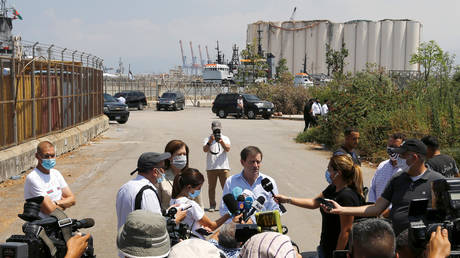