A surge in Covid-19 cases across Latin America has made it the second-worst hit region for virus deaths, outpacing the US and Canada and trailing only Europe. The situation has been exacerbated by poverty and lack of mass testing.

A total of 144,758 people have died from the coronavirus in Latin America as of July 13, surpassing the US and Canada’s death toll of 144,023, according to a new AFP tally.

More than 72,000 patients have died in Brazil alone. Latin America’s largest country has registered more than 1.8 million confirmed Covid-19 cases – the second-highest in the world behind the US, according to data compiled by Johns Hopkins University.

Brazilian President Jair Bolsonaro, who has been widely criticized for downplaying the dangers of the coronavirus, himself tested positive last week.

Experts say the situation remains particularly dire in many Latin American countries due to problems with getting mass testing on track, and was exacerbated by lower living standards among vast swathes of the population.

Overall, nearly 13 million people have been infected by the novel coronavirus across the globe, with almost 570,000 deaths, according to Johns Hopkins. 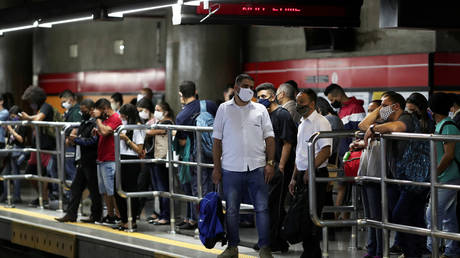