Talks sponsored by US President Donald Trump between Serbia and its breakaway province of Kosovo will still take place but without Kosovo leader Hashim Thaci, who was indicted for war crimes by an international court in The Hague.

Thaci has notified the White House that he was not coming, Ambassador Richard Grenell, Trump’s special envoy for Kosovo-Serbia talks, confirmed on Wednesday.

“I respect his decision not to attend the discussions until the legal issues of those allegations are settled,” Grenell added.

The President of Kosovo has just informed us that he has canceled his trip to Washington, D.C. following the announcement made by the Special Prosecutors Office.
I respect his decision not to attend the discussions until the legal issues of those allegations are settled.

On Wednesday, the Specialist Prosecutor’s Office (SPO) in The Hague issued a statement revealing that Thaci and a number of other Kosovo Albanian politicians have been charged in a ten-count indictment for “a range of crimes against humanity and war crimes, including murder, enforced disappearance of persons, persecution, and torture.”

The SPO names Thaci and Kadri Veseli – current head of the Democratic Party of Kosovo, which delegated Hoti as PM – as defendants in cases that involve “nearly 100 murders” and “hundreds of known victims of Kosovo Albanian, Serb, Roma, and other ethnicities and include political opponents.”

The indictment was actually filed on April 24, but is being revealed two months later because of Thaci and Veseli’s “repeated efforts… to obstruct and undermine the work” of the Kosovo Specialist Chamber, the SPO said, referring to the war crimes court set up in 2015.

Thaci and Veseli were among the founders of the so-called Kosovo Liberation Army, the ethnic Albanian insurgency that received NATO backing in 1999, during the alliance’s 78-day war against Serbia. The indictments refer to events of both during and after that conflict.

The armistice that ended the war handed Kosovo over to NATO peacekeepers under UN Security Council Resolution 1244, which recognized Serbian sovereignty over the province. In 2008, however, the Kosovo Albanians declared independence and were quickly recognized by the US and its allies, although half the UN members (including Russia, China, several EU member states and Serbia itself) have so far refused to follow suit.

The June 27 talks are supposed to focus on economic topics, with subsequent meetings eventually working their way to some kind of political solution, according to Grenell. The US initiative has split the Kosovo Albanians, with Thaci and the DPK-led government eager to take part, but with former Prime Minister Albin Kurti objecting and accusing the US of being partial to Serbia.

Kurti was ousted in a no-confidence vote back in March, after Grenell accused him of failing to uphold his end of the bargain regarding tariffs Kosovo imposed on all goods from Serbia.

Charges against Thaci and Veseli come a day after Kosovo Albanians lost a major ally in the US Congress, with Rep. Eliot Engel (D-New York) going down in defeat to primary challenger Jamaal Bowman. 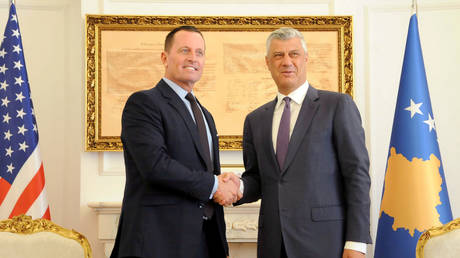