The king of Belgium has become the country’s first reigning monarch to express regret over colonial wrongs in Congo. It comes amid demands to remove more statues of the notorious King Leopold II from Belgian cities.

“I would like to express my deepest regrets for these wounds of the past, the pain of which is now rekindled by the discrimination still too present in our societies,” King Philippe wrote in a letter to Democratic Republic of Congo (DRC) President Felix Tshisekedi, quoted by Belgian media.

The Belgian rule of Congo saw “acts of violence and cruelty” that inflicted “suffering and humiliation” on the people of the African nation, the monarch acknowledged, marking the first time a reigning king of Belgium has apologized for the deeds of the past.

Belgium, a former colonial power, and DRC, which gained independence from Brussels back in 1960, “must be able to speak of our long common history in all truth and serenity,” Philippe stated.

The country’s colonial legacy came back into the limelight during massive anti-racism protests in Belgium in recent weeks. Protesters focused their rage on King Leopold II, the infamous owner of Congolese lands, whose heavy-handed rule saw millions of Africans die in the second half of the 19th century.

A first cousin of Queen Victoria, Leopold effectively turned Congo into his own fiefdom, making a huge fortune from collecting ivory and then harvesting and processing rubber.

Amid growing outrage, Leopold’s statues have been defaced in numerous Belgian cities and removed in Brussels and Antwerp. Local protest voices also demanded that the remaining monuments to the king be removed and that parks, streets, and squares named after him be given other toponyms.

For those supporting the divisive figure, Leopold II was the one who defended Belgium’s sovereignty and spearheaded ambitious construction projects still in use today. Earlier this month, Prince Laurent, Philippe’s younger brother, said their ancestor wasn’t responsible for the atrocities in Congo as he had never been there.

The royal court of Belgium refrained from commenting on the matter during the course of this month – until King Philippe broke the silence with the surprise letter to the DRC leader. 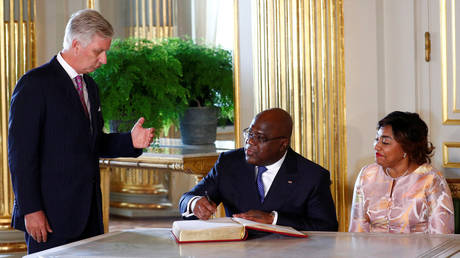