Kim Jong-un has credited the country’s socialist system with supposedly protecting North Koreans from the Covid-19 pandemic, saying not a single case of the devastating global disease has been registered in his country.

The bold, if unverifiable, claim was made by Kim in a televised speech following a military parade dedicated to the 75th anniversary of the founding of the ruling Workers’ Party. Recorded footage broadcast by North Korean state media showed neither officials nor the troops wearing face masks during the event, in contrast with some previous public gatherings.

Kim, who at times appeared to be very emotional, said he was grateful that nobody had contracted the disease in the North, an achievement that he partially attributed to the country’s socialist political system. He wished people affected by the global health crisis a swift recovery, and said that once it is over, people in the two Koreas will once again be able to join hands.

The North Korean supreme leader thanked the national military for its contribution towards fighting natural disasters, and pledged to continue investing in defensive capabilities. He also apologized for the fact his government cannot properly reward the people of North Korea for their resolve and hard work in the face of hardships.

“We will continue to strengthen war deterrence for self-defense to deter, control and manage all dangerous attempts and threatening acts, including ever-growing nuclear threats, from hostile forces,” Kim said as quoted by the media.

The United States was not mentioned at all during the speech, which lasted for about half an hour. Pyongyang considers Washington the primary threat to its national security and the justification for its development of nuclear weapons. Kim ignoring the US altogether after a demonstration of military prowess was deemed remarkable by many observers. 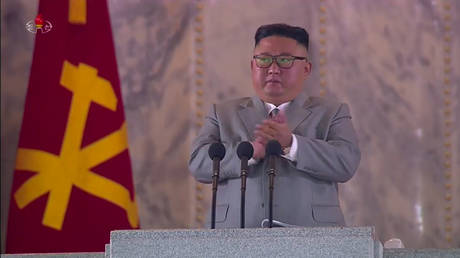