It seems pranksters Vovan and Lexus have successfully duped another politician, with audio suggesting Democrat VP nominee Kamala Harris was eager to accept a fake recording of Donald Trump, believing the caller was Greta Thunberg.

Vovan and Lexus, whose real names are Vladimir Kuznetsov and Alexey Stolyarov, posed as the teenage climate activist and her father Svante to make a phone call in January to Harris, just months before she became Joe Biden’s running mate.

“Congratulations on all your leadership. I’m so inspired by your courage and your voice,” Sen. Harris (D-California) tells the pranksters, in the audio clip obtained by The Sun.

The duo then claim they have “dirt” on Trump that could prove helpful to Harris, in the form of a recording of the president telling Thunberg “you will never achieve your goal.”

“I’m so terrified of what Trump is doing, I even cannot eat or sleep when I see him on TV. That terrible meeting in the UN building in September – I have nightmares. I saw him in the corridor and shouted to him to sign the Paris climate agreement. He came over and he said softly to me, ‘You will never achieve the goal,’” the fake ‘Greta’ says.

After Greta offers her support to Harris’s campaign, ‘Svante’ tells the senator that the conversation between Trump and his daughter was recorded and asks if the recording would be helpful to her. Harris appears to accept the offer. “That would be wonderful,” she says. She also accepts an offer from ‘Greta’ to testify against Trump.

The phone call then ends with the pranksters enthusing about the prospect of meeting Harris soon and begging her to “not arrest us” – a joke whose double meaning would’ve completely escaped her. “No, no, no!” Harris assures them. “I don’t want to go to jail!” ‘Greta’ responds. “I look forward to seeing you. Be well, and I’ll see you soon,” the senator promises.

Assuming this recording is legit it sounds like Kamala Harris agreed to accept dirt on Trump from foreignershttps://t.co/yGFXvsqlhl pic.twitter.com/mUldQHvUC8

Vovan and Lexus have managed to prank other politicians and get past the usually strict security measures, mainly offering criticism of Trump when they do so. They’ve spoken to both Sen. Bernie Sanders (D-Vermont) and Rep. Maxine Waters (D-California).

Harris had dropped out of the running for the presidential nomination for the Democrat Party only weeks before the phone call.

Given she’s been one of many Democrats accusing Trump of colluding with Russia during the 2016 presidential election, accepting “dirt” on the man ahead of a 2020 campaign is not a good look, as many on social media have pointed out.

“Woah! Kamala agrees to accept dirt on Trump from foreigners trying to meddle in our election,” author Ryan James Girdusky tweeted in reaction.

Kamala Harris, while being pranked, expresses willingness to accept foreign interference in election. https://t.co/RZkrkI3d4c via @MailOnline

Harris has spoken in the past of her admiration for 17-year-old climate activist Thunberg. In 2019, she said she was “deeply inspired” by her and claimed she’d “already made history” as a leader in the “international fight against climate change.” 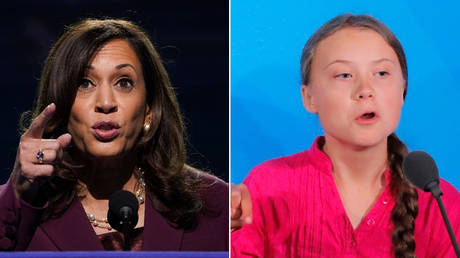