#JusticeforSteve: List of victims of police brutality worldwide gets longer but endless number of hashtags falls on deaf ears

#JusticeforSteve: List of victims of police brutality worldwide gets longer but endless number of hashtags falls on deaf ears

As the world grapples with questions concerning police brutality, racism, and discrimination, it’s worth taking a look back at a case that sparked outrage and calls for police reform in France a year ago.

The case of Steve Maia Caniço put a long record of excessive use of force by police under the microscope.

But, one year later, what has changed, if anything? Not a whole lot. Anti-police protests in the US have sparked renewed anger at the French police system. Steve represents just one of many cases of police brutality which resulted in the death of an innocent person. Time has passed but #JusticeforSteve, and so many others, is yet to be accomplished.

June 21, 2019 was supposed to be a happy, carefree day full of music, dance, friends, and fun. It was the day of the Fête de la Musique (Music Day), an annual music celebration in which various music festivals and concerts take place. Twenty-four-year-old Steve Caniço, like many his age, decided to attend the event. The concert he went to was located on the banks of the Loire River, on an island in the western city of Nantes.

Steve and his friends were having a great time till around 4:00am, when the police showed up to put an end to the celebrations.

According to a report compiled by the General Inspectorate of the National Police (Inspection générale de la Police nationale, IGPN), several DJs refused to stop playing music and instead called on the attendees to gather and resist the police intervention at around 4:15am. After turning off the music for a little while, the police began to withdraw at around 4:20. But they came back when the music started playing again soon after. According to the police, they were then attacked by a mob of concert-goers and their subsequent action was a mere ‘response’ to what they had been subjected to.

Those who attended the concert, however, tell a different story. They insist it was the police, not them, who began the offensive first. After analyzing footage of the event, French newspaper Libération concluded that the police account had indeed been false. According to the paper, the operation was clearly prepared beforehand and executed with the intent of dispersing the concert-goers, contrary to what the police statements said.

Footage taken the night of the incident shows how police continually threw tear gas canisters at the party-goers for over 20 minutes. They also used tasers and batons. According to testimonies from those present, police charged towards the crowds and caused panic. Due to the tear gas, the amount of people, and alcohol intoxication, over a dozen concert-goers reportedly fell in the Loire River that night.

There were reportedly several cries for help urging the police to stop because some people were drowning in the midst of the chaos. Nevertheless, they did not listen and instead continued releasing tear gas into the crowds.

That night, Steve went missing. His friends and family were especially concerned because he didn’t know how to swim. They feared the worst. The police had initially denied the possibility of a connection between Steve’s disappearance and the police intervention that night, and argued that Steve’s phone last transmitted a signal at around 3:16am, well before police had arrived at the scene. However, it was later discovered that his phone had actually last transmitted a signal at 4:33am, shortly after the police offensive began.

It’s worth noting that this wasn’t the first time Music Day celebrations turned violent because of police presence. In 2017, police intervention resulted in two youngsters falling into the Loire.

Several inquiries and investigations were launched after Steve’s disappearance, but the first answers didn’t come until after a month. Eighty-five of the festival attendees lodged a complaint against the IGPN on July 3 for “endangering the lives of others and willful violence committed by those holding positions of authority.”

Steve’s body was recovered from the Loire River, near the location of the festival, on July 29. The following day, a separate manslaughter investigation was opened by prosecutors. The hashtag #JusticeforSteve soon went viral on social media and several demonstrations against police brutality took place over the next weeks.

Before this, the police had released a report on the case on July 16, which was not immediately disclosed to the public. Steve’s family criticized the document for not having included any witness testimony of Steve’s friends or others present at the festival. The report only included testimony made by police, security guards, and emergency responders.

The Interior Ministry launched its own inquiry in September and concluded there had been a “lack of judgement” on the part of the police.

A year after Steve first went missing, the issue of police brutality has become the hottest topic in politics. In France, thousands have taken to the streets over the past weeks to protest against police brutality and racism. What’s worse, clashes with police broke out again at Music Day celebrations. Just like in 2019, police used tear gas to disperse crowds in Nantes this past Sunday.

Three judicial inquiries are still underway against an undisclosed figure simply referred to as ‘X’: one on a count of manslaughter, one for endangering the lives of others, and one for willful violence committed against a person holding public authority – the latter was filed by police officers against the concert-goers. Although the police maintain Steve’s death had nothing to do with their actions, family members are convinced the tragedy was caused by the police’s excessive use of force.

On Sunday, a demonstration was held in Nantes to mark the first anniversary of Steve’s disappearance. According to police, over 2,500 people took part in the peaceful march, with many holding a flower to commemorate the young man’s life. One of Steve’s friends, who also took part in the gathering, said: “Inequality rages on every street corner. Steve, just like George Floyd, Adama Traoré, Rémi Fraisse, Zineb Redouane, Malik Oussekine and others has become a symbol!” The other names also refer to victims of police brutality.

Another friend added: “These days, I am afraid of the police. When I’m taking part in a demonstration, I don’t know what could happen to me because of my dreadlocks.”

It remains to be seen whether this year will finally mark the end of what seems to have become a tradition of police brutality, not only at music festivals, but against minorities and innocent people from all walks of life on a daily basis. For now, however, the list of names continues to grow longer and the seemingly countless number of hashtags demanding justice seem to be largely falling on deaf ears. 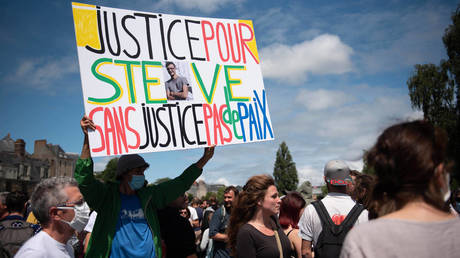