The only task US officials seemingly have is finding a way of pinning the blame for literally any incident on Moscow, Russia’s deputy UN envoy jokingly said as former US ambassador to the UN Nikki Haley did just that.

The ex-UN envoy apparently decided to jump on the bandwagon of Russia bashers and put all the blame for the massive riots gripping the US following the murder of an African American by a cop on Moscow.

Haley stated in a Twitter post that “playing up” the “allegations” of police abuse in America has been the new tactics of Russian intelligence apparently hell bent on disrupting yet another US presidential election. Never mind that the killing of George Floyd, which sparked the large-scale anti-police brutality protests, happened in broad daylight and was filmed and uploaded to social media by eyewitnesses.

In the lead up to this fall’s election, Russian intelligence agencies have upped the ante. They’ve encouraged & spread hateful rhetoric by extremist groups, and played up allegations of police abuse in America. @standamericanow https://t.co/oABvopY4yO

Haley also said that the Russian agents allegedly “spread hateful rhetoric” through American extremist groups – all while sharing a quite murky New York Times article accusing Russia of literally being behind almost every extremist group in the US – both black and white – all while citing anonymous sources and being conspicuously mum about any details or evidence.

Her statements prompted Russia’s deputy ambassador to the UN Dmitry Polyanskiy to joke that pointing the finger at Russia has turned into a sort of sacred ritual magically absolving Washington of any responsibility for whatever happens.

“Now we know who is to blame for American racial mess! US is innocent of any troubles and wrongdoings, all the abhorrent things that we are seeing now are due to Russian agents’ encouragement!” he wrote in a Twitter post.

Dear Nikki, thank you, now we know who is to blame for American racial mess! US is innocent of any troubles and wrongdoings, all the abhorrent things that we are seing now are due to Russian agents’ encouragement!What an easy task US officials have – just blame Russians!👍🏻 https://t.co/XIlr4hlWZ7

What an easy task US officials have – just blame Russians!

Haley is certainly not the first to fall for the drawing power of this marvelously simple idea – to just pin it all on Russia. The ‘Russian card’ has already been played by all sorts of US officials and public figures, including ex-Obama National Security Advisor Susan Rice, Senator Marco Rubio (R-Florida) and a CNN reporter, Donie O’Sullivan.

Moscow has repeatedly denied all such allegations and said that the very idea of the protests being directed by someone from abroad is an insult to American citizens. 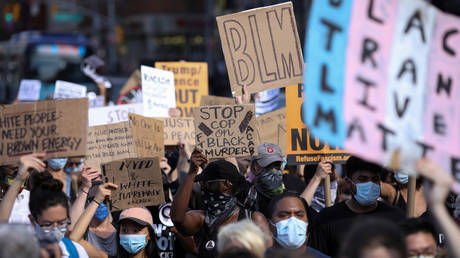