Jupiter and Saturn will come closer to each other in the Earth’s night sky than they have for almost a millennium between December 16 and 25 in an extremely rare astronomical extravaganza.

The pair will be separated by one fifth the diameter of a full moon as viewed from the Earth, in an extraordinary astronomical proximity event which has not occurred for 800 years.

“Alignments between these two planets are rather rare, occurring once every 20 years or so, but this conjunction is exceptionally rare because of how close the planets will appear to one another,” says astronomer Patrick Hartigan from Rice University.

For context, their previous closest celestial encounter on record (as we see them anyway) was on March 4, 1226.

As always, the best viewing conditions will be near the equator but, with clear enough skies, it should be visible from anywhere on Earth about an hour after sunset each evening.

Stargazers should point their telescopes toward the western sky, especially during the closest approach on December 21, when the pair will appear as a “double planet.”

“For most telescope viewers, each planet and several of their largest moons will be visible in the same field of view that evening,” Hartigan adds.

The viewing window will be shorter for those in the northern hemisphere, however, so stargazers are encouraged to make preparations well in advance and head out early to avoid missing the mesmerizing meeting.

Their next astronomical alignment is expected in March 2080 and then again in 2400. 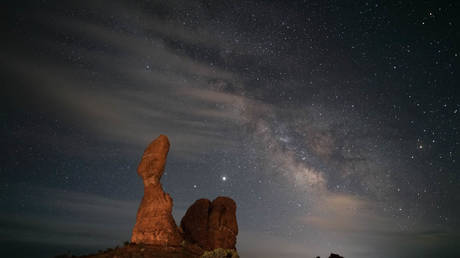