Three Russian troops and several Turkish soldiers have been injured in Syria’s Idlib governorate, the Russian military has said. They were hit by a roadside bomb while conducting a joint patrol.

The incident happened near the town of Ariha in the north west of the country, a Russian report said on Tuesday. The injuries sustained by Russian troops are said to be light.

“The patrol mission was aborted. Evacuation of damaged vehicles is underway,” the statement said, adding that Russian and Turkish investigators were working to identify who planted the IED.

The Turkish side would not immediately comment on the news.

Bomb attacks target patrols by Russian-Turkish columns along the strategic M-4 road in Idlib on a regular basis. The last such incident was reported in mid-June.

Joint patrols began in the Idlib governorate in March, following last year’s escalation, during which Turkey clashed repeatedly with Syrian government troops. The situation was defused with the help of Russian mediation.

Idlib remains a major stronghold of anti-government forces in Syria and served as a base of operation by radical jihadist groups, which launched attacks into government-controlled territory. Turkey, which backs some armed groups in the governorate, opposed Damascus’ intention to push back Idlib radicals, saying military action would cause a mass exodus of refugees across the Turkish border. 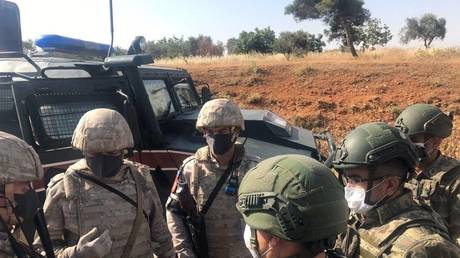