The lower chamber of Japan’s parliament declared a climate emergency on Thursday, after the new prime minister recently pledged to make the country carbon neutral by 2050.

Over 75 percent of the country’s electricity is being generated by coal, liquefied natural gas and oil, and the lawmakers see their symbolic vote as a call for action which could help combat global warming.

Citing climate change and “unprecedented damage” from flooding and forest fires, the non-binding declaration warns of the “climate crisis” the world is facing. And the resolution shows that Japan is not lagging in the fight against global warming, said Yoshihisa Furukawa, an MP from the ruling Liberal Democratic Party. “I think this can send the message to the world that Japan’s parliament and government are firmly resolved to tackle this, aiming at a carbon-free society,” he told Reuters.

PM Yoshihide Suga pledged in October to cut greenhouse gas emissions in Japan to net zero by 2050. “Response to global warming is no longer a constraint on economic growth,” he said at the time.

The government’s previous target was reducing emissions by 80 percent by 2050.

The Japan Business Federation sees achieving carbon neutrality by 2050 as a very difficult challenge, but its chairman Hiroaki Nakanishi said this will lead to “the strengthening of Japan’s industrial competitiveness.”

The government is working on increasing the share of Japan’s renewable energy from the current 22 to 24 percent and making it the main power source over nuclear and others.

Suga wants Japan to introduce as much renewable energy as possible, but he said it would also “pursue nuclear power.”

The nuclear industry provided about 30 percent of the country’s electricity before the Fukushima disaster in 2011. Japan had 54 operating reactors at the time, and currently only two of them are operating. 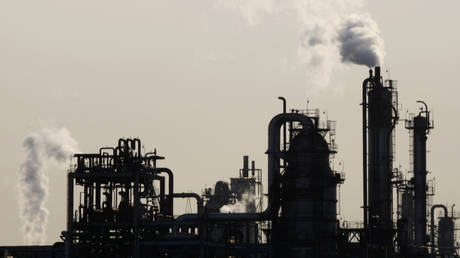