Japan does not need a new state of emergency to tackle the Covid pandemic, Prime Minister Yoshihide Suga has said, as regions around the country report record daily highs of cases and scientists warn of a third wave of infections.

“Experts don’t yet feel we’re at a situation where we need to institute another state of emergency,” Suga said on Friday.

The first state of emergency was imposed in Japan in April, and was lifted the following month.

New cases have surged most in Hokkaido, Tokyo, Osaka and Aichi, Suga told reporters, adding that he ordered ministers to take action according to the level of infection in different parts of the country.

Assistance from the central authorities will include conducting large-scale testing, and dispatching experts to deal with infection clusters.
The PM also urged the public to take basic anti-infection precautions, wear masks, and avoid big gatherings.

The government, however, does not want to change its national tourism scheme, dubbed ‘Go to Travel,’ which critics say could aggravate the Covid outbreak in Japan. The program aims to support the travel industry – which has been devastated by the global pandemic – by encouraging domestic tourism through subsidies.

On Friday, the number of national daily infections rose to a record 1,685 cases. Many regions posted record daily highs, while the capital Tokyo recorded 374 infections, down slightly from the 393 cases logged on Thursday.

Overall, Japan has recorded 116,220 coronavirus cases and nearly 2,000 deaths since the start of the pandemic, according to broadcaster NHK.

The Japan Medical Association warned earlier this week that the new spike in cases could be the start of a third wave of infections. “There have been clear signs of a resurgence in infections since last month,” said the association’s president, Nakagawa Toshio.

This will inevitably strain the healthcare system, Nakagawa said, urging the government to take steps and limit spread of the virus before it’s too late. 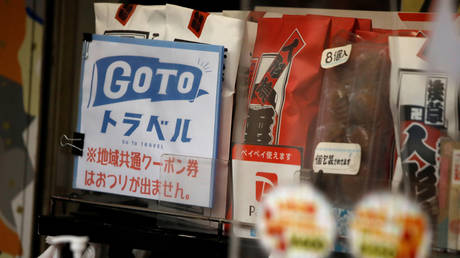