Two South Korean fisheries associations have filed a lawsuit, demanding the Japanese government’s compensation over its plan to dump contaminated water from the Fukushima nuclear power plant into the sea.

The court filing is seeking 10 million won ($8,850) per day from the Japanese government and Tokyo Electric Power Company Holdings (TEPCO) due to the environmental impact of the plan to dump the water. Fishers fear they will make 50% less in commissions from consignment sales after the contaminated liquid is released.

“Insisting on discharging the water into the sea, when there are other safe ways to handle it, is an illegal act against the fishermen and people not only of Japan but also of neighboring countries,” one of the plaintiffs said outside the Jeju District Court on Thursday.

It is not clear how far the case will get in the judicial system, as the fishing associations accept that a judge could rule the Japanese government and its actions are protected by “sovereign immunity.” However, the groups hope that the court will grant an exception over the situation, as they feel it’s a serious crime, having likened it to a “crime against humanity.”

The lawsuit comes weeks after South Korean fishing vessels took part in a rally, with 800 individuals sailing off the coast of Incheon to demonstrate against the dumping of more than one million tons of contaminated water. The boats displayed slogans stating “withdraw Japan’s decision” and “condemn irresponsible nuclear attack” to express their concern and opposition to Japan’s actions.

The Japanese government and TEPCO are currently set to begin releasing the contaminated water in 2023 despite objections from neighboring nations, including South Korea and China.

Speaking on May 7, the Chinese Foreign Ministry condemned Japanese officials for acting like “ostriches” and choosing to “bury [their] head in the sand,” instead of admitting that releasing the water could “endanger the global marine environment.”

Japan has repeatedly defended its decision to release the supposedly treated radioactive water into the ocean, claiming it’s “unavoidable” and complies with expert advice of a “controlled environmental release.” 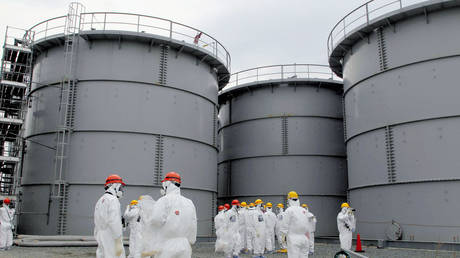