Tokyo has aborted plans to go ahead with the Aegis Ashore missile defense sites, having deemed them both unsafe and too costly. Its alternative to the defensive option is quite the opposite: striking enemy firing positions first.

He said it had borne in mind the ballooning costs of the $4.1 billion contract signed with the US to build, supply, and maintain the two Aegis Ashore sites during their 30-year lifespan. The central government also seems to have listened to the views of local politicians and residents in Akita and Yamaguchi, who feared the Aegis launch sites would make their neighborhoods the target of a retaliatory strike in an all-out conflict.

It would also be impossible to ensure that launching the Aegis missiles would be completely safe for the Japanese population, Kono explained. There was no certainty that the detachable boosters would land in a designated sea area every time an interceptor missile was fired.

Japan already paid roughly one half of the hefty sum in advance as part of the deal reached with a constellation of American defense vendors – Lockheed Martin and Raytheon Technologies among them – back in January 2019.

With the Aegis Ashore deployment plans now scrapped, Tokyo will consider other alternatives to the costly systems. Kono himself signaled that, among several options, the government is considering procuring weapons that would enable the Japan Self-Defense Forces to target enemy missile sites first – a move that would signal an about-turn on the country’s officially pacifist military policy.

Earlier this month, Prime Minister Shinzo Abe reflected on the issue in a more straightforward way. While Japan’s post-war constitution gives up “the right of belligerency of the state,” there is a question as to whether it should “stay within the boundary when the enemy capability is dramatically advancing,” he said.

Tokyo had previously explained the need to install the Aegis Ashore by citing the alleged unresolved threat of North Korea’s frequent missile launches. Both defense compounds, which would have included ground-based missile silos, radars, and sensors, were meant to protect the entirety of Japan, from north to south, according to the official rationale.

Japan was one of a few privileged US allies tapped to host the Aegis Ashore. Far away from Asia-Pacific, one such site has already gone online in Romania, while another is under construction in Poland.

Moscow envisioned the deployments as an immediate threat to its security, arguing the Aegis launchers could be used to fire cruise missiles such as Tomahawk – although the system has been designed as defensive in nature. 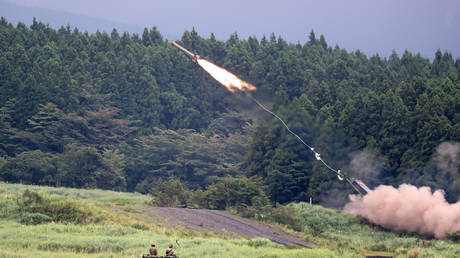