The World Health Organization (WHO) has said it was notified by Japan about the detection of a new Covid-19 variant there, as the government extends the state of emergency declared to control the virus in Tokyo to other areas.

WHO director-general Tedros Adhanom Ghebreyesus said on Monday that the Japanese health authorities had informed the UN health agency of the new strain at the weekend, after it was detected in four travelers from Brazil’s Amazonas state.

The variant has 12 mutations, one of which has been found in the strains discovered in South Africa and the UK. The Brazilian Health Ministry said this implied the variant was more transmissible.

“The more the virus spreads, the higher the chance of new changes to the virus,” Ghebreyesus said at a WHO briefing on Monday. “Notably, transmissibility of some of the variants appears to be increasing. This could drive a surge of cases and hospitalizations.”

On Monday, Japan’s Prime Minister Yoshihide Suga announced the declaration of a state of emergency in Osaka, Kyoto, and Hyogo due to the increased spread of coronavirus and decreased hospital capacity in those locations.

Just days earlier, he had announced the measures for Tokyo and its surrounding area after the capital saw an increase in Covid-19 cases of almost 500 in one day. The restrictions are to remain in place until February.

In the past 24 hours, Japanese health authorities reported 4,875 new Covid-19 infections and confirmed that 864 people are now critically ill with the virus – a new record high for the country. 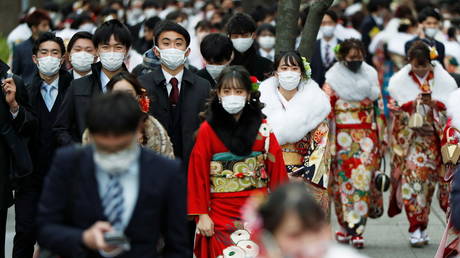