Tokyo might’ve said that Aegis Ashore missile systems were too expensive and dangerous to use, but it hasn’t given up on building the American defense package completely, an informed source has told Reuters.

In July, Japanese defense minister Taro Kono announced that plans to install two Aegis Ashore sites had been cancelled. The systems were too pricey, while the falling booster stages from their interceptor missiles could kill civilians on the ground, the minister explained.

But a source with direct knowledge of the issue has now told Reuters that the decision wasn’t final. The unnamed official – it’s unclear if he or she was American or Japanese – said that Tokyo was in consultations with Washington, asking for a technical assessment on using alternative placement sites that would eliminate dangers to the population.

Among the options being considered is building Aegis Ashore on sea platforms or in remote coastal areas.

“Japan wants to preserve its contracts and reutilize equipment,” the source pointed out. Even if Tokyo doesn’t purchase American missile launchers, the billion-dollar contract for Aegis Ashore radars still remains in place, he added.

The deal was worth around $2.3 billion, with the country’s defense ministry saying that, with operating expenses, the overall cost would rise to around $4.2 billion over the next 30 years.

The whole project was scandal-ridden from the very start as locals in Akita and Yamaguchi Prefectures protested against Aegis deployment in their backyard. The defense ministry then found itself in hot water after it was reported that the sites for the US systems had been chosen using Google maps and nobody had even cared to actually visit the locations. 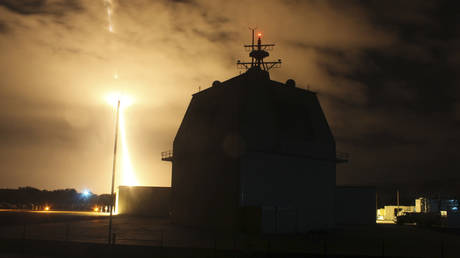