A sticker scheme to mark homes of self-isolating families has been proposed by the provincial government in Jakarta, Indonesia. The program aims to improve support for isolating households, but critics say it will create stigma.

The plans announced earlier this week are reportedly aligned with a gubernatorial decree which stipulates a number of practical requirements for Covid patients self-isolating in their own homes.

Jakarta’s Deputy Governor Ahmad Riza Patria said that the scheme would help local healthcare officers treat patients, while also keeping local residents informed about who in the area is self-isolating.

It is important to let the officers and the neighborhood know that there are residents conducting self-isolation at their homes.

Some are already pushing back against the proposal. Jakarta’s Ombudsman Teguh Nugroho warned that it could lead to the stigmatization of Covid-19 patients, according to local reports. However, he did agree that allowing people to self-isolate in their own homes would be cheaper for the government rather than authorities renting hotel rooms or using up hospital capacity.

In September, it was announced that the government had rented some 3,711 rooms in 27 hotels as quarantine facilities for asymptomatic Covid patients and those with mild symptoms.

A similar sticker program was implemented in India with mixed results, as the stickers reportedly created “stress and psychological pressure” for residents, many of whom were isolating as a precaution. Some residents tore down the sticker that had been pasted onto their homes.

Indonesia is one of the most coronavirus-afflicted countries in the region, with 320,564 confirmed cases and 11,580 fatalities to date, according to official figures. The government reported 4,850 new cases of coronavirus on Thursday. 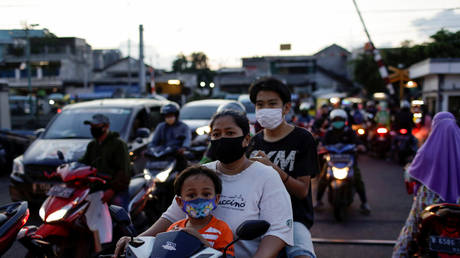 Google Chrome can now reveal if yo...