US Secretary of State Mike Pompeo has declared the choice of whether Israel should annex the occupied West Bank is “for Israelis to make.” Israeli settlements in the Palestinian territory remain illegal under international law.

Pompeo gave the go-ahead to Israel’s annexation effort during a press conference on Wednesday, effectively telling Israeli PM Benjamin Netanyahu that Washington would not stand in his way.

Decisions about Israelis extending sovereignty to those places are decisions for the Israelis to make.

Tel Aviv has vowed to annex a sizable chunk of the West Bank by July 1 – 30 percent, by most reports.

The annexation would make official the de-facto state of affairs in the West Bank’s Jewish-only settlements, which, despite repeated UN resolutions declaring them illegal, have the tacit support of the Israeli (and more recently the US) government, and would also lay claim to the Jordan Valley. Palestinian leaders are firmly opposed to it, and the plan has divided not only the international community but Israel itself.

While the Trump administration has backed annexation with its otherwise-moribund “Deal of the Century,” many US allies have voiced opposition. Thousands of European parliamentarians – and several Israeli public figures – warned in a letter earlier this month that the move would have unprecedented “destabilizing potential” for the region, setting a precedent that other states could use to “disregard basic principles of international law.“

The UN and the Arab League have also begged Netanyahu to rethink his plans, and a group of UN-affiliated special rapporteurs and experts last week deemed the annexation “21st century apartheid.”

Even the American-Israeli Public Affairs Committee, the most powerful Israeli lobbying group in the US, has hesitated to voice support for annexation. The group reportedly informed US lawmakers that it would not attack them if they opposed the move, so long as they didn’t attempt to cut back on the massive amount of foreign aid Washington gives Israel – an unprecedented concession from an organization that normally eviscerates any American lawmaker who deviates from full-throated support for Tel Aviv.

The Senate Foreign Relations Committee recently approved an aid package of “at least” $38 billion to Israel, to be distributed over 10 years, a move that has outraged some Americans as the country struggles with record unemployment and a massive economic depression due to government response to the Covid-19 pandemic.

While one might expect the more left-leaning Israelis to oppose annexation, some of the most hard-line Israeli settlers are also opposed to the move, reasoning that leaving 70 percent of the West Bank for a potential Palestinian state is undesirable – better to hold out for the whole territory. 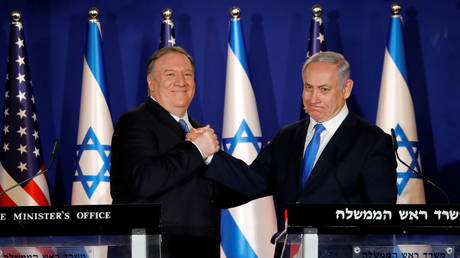