Stella Moris, the partner of Julian Assange, has launched a CrowdJustice campaign to help reinforce the WikiLeaks founder’s legal defense as it faces new traps set by US prosecutors.

The crowdfunding appeal is designed to help cover the extensive legal costs of the London Magistrates hearings to decide whether Assange will be extradited to the US, where he faces a possible 175-year prison sentence.

The charges leveled against the journalist include conspiracy, vague accusations that he recruited hackers to assist him, violation of the US Espionage Act, and conspiracy to “commit computer intrusion” for allegedly trying to help ex-US Army whistleblower Chelsea Manning.

Our children need their father back. Please help me make that happen.#SaveJulian#FreeAssangehttps://t.co/cTboMeu8b7

Moris, who has two sons with Assange, issued the call to arms to “fight against extradition and his continuing imprisonment,” while warning that the case sets a dangerous precedent for press freedom around the world, especially given that Assange and WikiLeaks exposed US war crimes and human rights abuses.

The Obama administration opted not to prosecute Assange but the Trump administration is pursuing the Australian’s extradition under 100-year-old US laws, Moris says, adding that no publisher or journalist has been pursued using this legislation, which allows no possibility for defense of public interest.

The 49-year-old has been locked up in Belmarsh Prison in the UK for the past 16 months. He is confined to his cell for up to 23 hours a day, even during the Covid-19 pandemic, with no visitors allowed since his arrest at the Ecuadorian embassy on 11 April 2019.

Charges were initially leveled against the journalist and publisher in April 2019, totalling some 18 counts related to receiving and publishing government documents. However, the prosecution changed the indictment to broaden its reach in July 2020.

This effectively puts the squeeze on the defense team as it scrambles to prepare new legal arguments with already limited and stretched resources, something which Moris has likened to “climbing the Himalayas.”

Assange’s next hearing is slated to begin on September 7 at the Old Bailey. 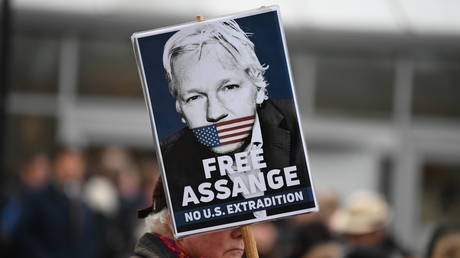