Italy extended the coverage of its Covid Green Pass on Wednesday, requiring any individual travelling via train, plane, ferry, or inter-regional coach to have received at least one dose of a Covid vaccine before travelling.

Italian Prime Minister Mario Draghi introduced the Green Pass earlier in the year in an attempt to encourage residents to get vaccinated against Covid, with it initially only covering cultural and leisure venues.

The decision to require vaccination before allowing travel follows a statement from Italy’s foreign minister, Luigi Di Maio, on Tuesday, condemning a “climate of hatred” against the country’s Covid vaccination campaign, citing threats made by individuals on social media.

It comes after the government announced that teachers will have to be vaccinated before schools reopen later in September, with officials preparing to impose the same requirement on individuals serving in public office or working in supermarkets.

While Italy was one of the first nations to be seriously impacted by the Covid pandemic, the country has since managed to administer 77 million doses of a Covid vaccine, with 70.1% of over-12s in the country fully inoculated.

The decision to require a Covid vaccination before travel was met with a small number of protests from Italians, who argued that it encroaches on their freedoms, with a demonstration scheduled for Wednesday.

In response to the threat of protests, the Italian government pledged to enforce a zero-tolerance policy on anyone who blocks transport hubs, including train tracks. The nation’s interior minister, Luciana Lamorgese, declared that “no illegal acts will be permitted in protest initiatives,” condemning those who opposed the extended restrictions. 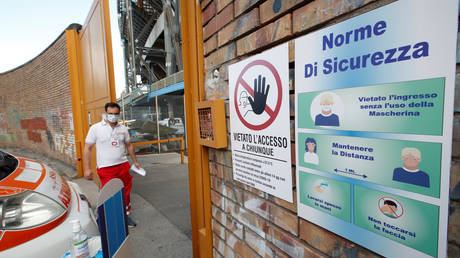 Germany presses for Iran to come b...

‘People are calling me a Muslim-ha...