Prime Minister Mario Draghi has said that Italy should stop administering Covid-19 vaccines to people under 60 years old, in a major shake-up of the country’s immunization program that aims to protect elderly citizens.

“How can a young person or someone who is not on the [priority] list jump the queue, knowing that he or she is exposing someone who is over 75 or frail to the risk of death,” Draghi told a news briefing on Thursday.

Italy had so far not followed many of its European neighbors in prioritizing the elderly for vaccination against Covid-19, despite the country’s high death rate.

The PM said he was in “no doubt” that Italy would meet its vaccination objectives, which include giving the jab to all people over 80 and most of those over 75 by the end of April.

Draghi said he does not have a date for when the Italian economy can reopen, but that the vaccine rollout changes reduce the risk of death in the most vulnerable, paving the way for a smoother easing of the restrictions.

Italy’s current lockdown measures, which force bars, restaurants and non-essential retailers to stay shut, are in place throughout April.

On Wednesday, the Italian government announced it would only offer the Vaxzevria vaccine developed by AstraZeneca to people aged 60 and over due to the higher prevalence of blood clots in younger people who have received the jab.

The move followed a review by the safety committee of the EU’s drug regulator, the European Medicines Agency (EMA), which found that some clots with low blood platelets can be “very rare side effects” of the AstraZeneca vaccine.

Most of the small number of cases reported to date were in women under 60 and within two weeks of their vaccination, the EMA said on Wednesday. 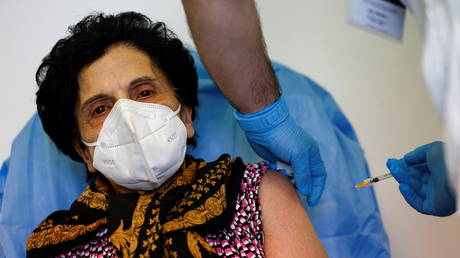