The Italexit Party has told the media that it is planning to withdraw Italy from the European Union within the next election cycle, and had already mapped out a political route for the process.

The party, founded in July by sitting Senator Gianluigi Paragone, was inspired by the UK’s Brexit movement, and more directly by the Brexit Party, led by conservative politician Nigel Farage.

The party’s spokesperson, Sergio Montanaro, announced the goal of commencing the country’s own Italexit process in “less than two years” during an interview with the Daily Express on Sunday.

Taking Italy, one of the EU’s founding members, out of the bloc might seem like an insurmountable political challenge. However, “it is possible,” according Montanaro. “It is about political will,” he said.

The Italexit Party doesn’t shy away from comparison to the UK’s successful but diplomatically messy effort to leave the union.

The Italian people, just like the British, want to get out of this cage.

“This is because we believe that we carry a message of national identity,” he later added.

Montanaro also explained the party’s seemingly ambitious “two-year” plan, saying that they are aiming to fill Italy’s legislature with “people who want to leave the European Union.” Presumably, the country’s 2023 general election would be Italexit’s moment of truth.

Should the movement succeed electorally, the next phase of the plan would be “very simple,” according to Montanaro.

“If we were the governing party, the first thing we would do is trigger Article 50 of the Lisbon Treaty,” he explained, referring to the legal clause which allows nations to withdraw from the EU.

The Italexit Party also has plans to “create a parallel currency,” which would at first coexist with the euro “during the two years it takes to actually leave the bloc.” During those two years, Rome “would negotiate with other states.”

“And all of them will want to do trade deals with us,” Montanaro added.

We’ll get back control of your nation and its currency.

While it is impossible to gaze into the Italexit movement’s future, a recent poll, conducted by Euronews, found that among the ‘Big Four’ EU states – Germany, France, Spain and Italy – the last one was “the most in favor” of leaving the bloc in five years. Notably, some 45 percent of Italians express a wish to leave the union.

The ‘ground zero’ of anti-EU action, the UK, is currently in the final stages of bilateral negotiations with the bloc regarding its formal withdrawal. Thus, London is set to exit the European Single Market and European Customs Union on January 1, 2021. 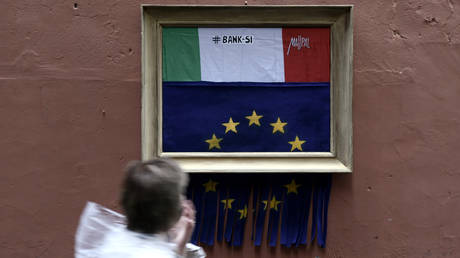