It will be free: Turkish govt shows ‘silver lining’ of turning Hagia Sophia into mosque for Istanbul visitors

It will be free: Turkish govt shows ‘silver lining’ of turning Hagia Sophia into mosque for Istanbul visitors

Turkey’s culture ministry has officially handed over the reins of the legendary Hagia Sophia to the country’s top religious authority, reassuring tourists they will still be able to get in and won’t have to pay.

The country’s religious directorate and the Ministry of Culture on Thursday signed a cooperation protocol to turn the ancient Byzantine cathedral into a mosque.

Turkish Culture Minister Mehmet Nuri Ersoy tried to address the concerns that the transition will negatively affect tourists by tweeting “The Hagia Sophia Mosque will be open to local and foreign tourists, as it used to be, and no entrance fee will be charged anymore.”

The Hagia Sophia Mosque will be open to local and foreign tourists, as it used to be, and no entrance fee will be charged anymore.

We are also significantly increasing the restoration budgets allocated for #HagiaSophia by the instructions of our President @RTErdogan.

Ersoy said that he believes that now the iconic temple will attract even more visitors. “There will be millions of people not only from our country, from all over the world who come to worship and visit our Hagia Sophia Mosque,” Ersoy said.

He also added that the structure will be carefully protected, with the ministry supervising restoration and conservation work, while the religious directorate will oversee prayers. The minister added that Hagia Sophia is standing tall today and is part of the UNESCO World Heritage List due to the efforts of the Turkish nation.

The announcement did not include information about any new rules for the temple’s guests. It is safe to assume that visitors will have to dress modestly, covering their skin, and women will be required to cover their heads. Also it is unknown if visitors will have to take off their shoes or if parts of the mosque will be off limits to tourists.

The authorities also promised earlier that Christian icons would be preserved, but they didn’t clarify if they would still be in open view.

Zeynep Ahunbay, a leading historian involved in the conservation of Hagia Sophia, expressed her concerns in multiple interviews over the funding for the restorations now that there would not be a flow of money from tourists and whether Christian icons will be visible.

“With the images of Madonna, mother of Christ, and other saints on the walls – do they accept to pray in the presence of these images?” she asked on Sky News.

Originally the UNESCO World Heritage Site was built in 537 as a Roman Christian church of Hagia Sophia. Later in history, when the city of Constantinople was captured by the Turks and renamed Istanbul, it became a mosque of Ayasofya. In 1934 Turkey’s secular republican government signed a decree to turn it into a museum.

Last week, the decree was annulled by the country’s top court, provoking outcry from both secular and Christian organisations worldwide. 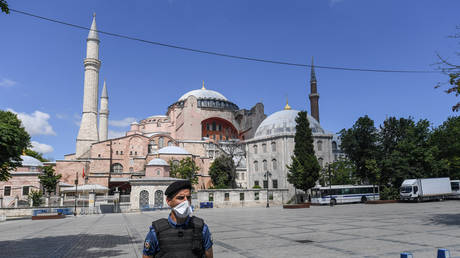 ‘Independent’ Mexico has every...