Petro Poroshenko acknowledged that Ukraine carried out a sabotage operation in Crimea but promised it would never happen again, in what appears to be a 2016 phone call with the then-US Vice President Joe Biden.

Derkach previously disclosed a batch of audio recordings of what sounded like Biden and Poroshenko discussing a range of topics. The leaked tapes have been interpreted by some as proof of corruption.

In the new recording, the alleged Biden reminds the alleged Poroshenko that the United States had previously disapproved of a Ukrainian plan to “sabotage military targets inside Russian territory.”

He then chides Poroshenko, stressing that “military and sabotage operations” should not be used against Moscow.

“Every time the CIA screws up in the United States, it’s the president’s responsibility. Period,” Biden says.

“I fully understand that Joe,” replies Poroshenko, adding that he has ordered a “very thorough investigation” into the matter. The Ukrainian president then insinuates that the “operation” had not been carried out with his approval or knowledge.

The Ukrainian leader goes on to say that he wanted to force out Valery Kondratyuk, then the head of the Main Directorate of Intelligence of the Ministry of Defense of Ukraine (HUR MOU), but that his removal would be too suspicious.

“Anybody could interpret that as a recognizing of any responsibility,” Poroshenko said in broken English.

Later in the conversation, Biden takes issue with Poroshenko’s assertion that his administration has acted responsibly and transparently.

“Whether you knew they were going forward in Crimea or not, and I believe you said you didn’t know, okay I believe it, but we had no idea what you were about to do. It wasn’t fully transparent and it causes a gigantic problem,” he told the Ukrainian leader.

Biden then laments that “it’s a whole lot more difficult now for me to make my case for you in this country, and I don’t want to sugarcoat it,” adding that whatever happened in Crimea, “it cannot come close to happening again.”

The US vice president closes the call by telling Poroshenko that he hopes that his “intelligence services figured out that any provocation like the one that occurred” would only serve as a “pretext” for Russia to retaliate against Ukraine.

The pair were likely discussing a foiled attack in Armyansk in northern Crimea between August 6-8, 2016. On August 10, Russia’s Federal Security Service (FSB) announced that it had prevented terrorist attacks in Crimea that were planned by the Ukrainian Defense Ministry’s intelligence agency. The FSB claimed that the HUR MOU was preparing to target the Russian peninsula’s critical infrastructure. An operation to apprehend the saboteurs resulted in several firefights, which resulted in one FSB agent and one Russian soldier being killed. Several members of the Ukrainian cell were captured and later confessed, according to the Russian agency.

Poroshenko had vigorously denied any involvement, describing Russia’s description of the events as “senseless and cynical.” 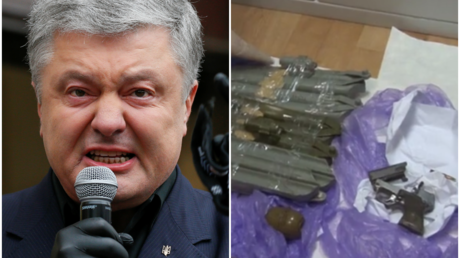