Tourism Minister Asaf Zamir quit the Israeli government on Friday, citing his opposition to new rules which restrict people’s right to protest amid the pandemic, as well as his lack of trust in PM Benjamin Netanyahu.

“My conscience does not allow me to stay in a government that prevents de facto protests against its head,” Zamir wrote in a Facebook post announcing his resignation.

He also accused Netanyahu of putting his personal issues ahead of the government’s response to the coronavirus crisis currently raging in the country. “I can no longer sit in a government in which I don’t have an ounce of trust in the person at its head,” Zamir wrote. “I sadly state that the coronavirus crisis and its dire consequences is at best in second place on the prime minister’s list of priorities.”

At the top of Netanyahu’s priorities are personal and legal considerations, the minister claimed, adding that the PM runs the country according to his own political interests. “Netanyahu has no ability to rescue the country from the deep crisis it is in. He led us into it. He is the main responsible for the health, economic and social crisis that threatens us all,” Zamir posted.

The politician is a member of the Blue and White party led by alternate Prime Minister and prominent Netanyahu rival Benny Gantz. He is the first minister from the party to resign from government. Last week, Science and Technology Minister Yizhar Shay also contemplated resigning over the second lockdown, but was reportedly talked out of it by Gantz.

Meanwhile, Netanyahu’s Likud party accused Zamir of resigning for his own political reasons, as he is expected to run for Tel Aviv mayor in the next election.

‘We are not going to stop’ | Clashes between protesters & police at anti-govt demo in #TelAviv pic.twitter.com/DHDXj1L4Sc

A government-backed edict approved by parliament on Wednesday bans Israelis from holding demonstrations more than 1km (0.6 miles) from their homes. The measure tightened restrictions amid a second coronavirus lockdown in Israel, which went into effect on September 18 as the country saw a surge in new infections. The number of new cases has climbed to over 7,000 a day.

The Israeli government has come under heavy criticism for the protest restriction, with many seeing it as a means to block demonstrations near Netanyahu’s official residence in Jerusalem. Protests against the PM and his handling of the economy as well as the coronavirus crisis have continued, even if in smaller numbers. On Thursday, dozens protested in Tel Aviv, and police arrested 12 demonstrators over public disturbances. 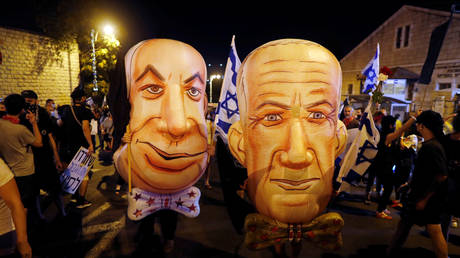 Looking back on Bali: Racy Russian...