A senior Israeli police officer is in hot water after he was filmed violently punching people during mass protests in Jerusalem. The officer, however, claims he was defending himself from rowdy protesters.

The Justice Ministry launched an investigation into the conduct of Jerusalem District Police Chief Superintendent Nisso Guetta on Sunday.

The high-ranking officer was filmed overnight punching and throwing protesters to the ground during a demonstration against Prime Minister Benjamin Netanyahu.

While the footage available does not conclusively show what exactly prompted the officer’s violent behavior, he claimed the protesters attacked him and he was merely defending himself.

The mass protests, which have entered the 9th consecutive weekend, turned out to be particularly violent overnight. Around 30 people were detained in Jerusalem, and law enforcement said several officers were injured.

An estimated 10,000 people hit the streets of Jerusalem on Saturday night, gathering outside of Netanyahu’s official residence and trying to block multiple intersections. While the alleged corruption of Netanyahu, who has been entangled in several high-profile investigations for years now, remains the focus of the protests, the unrest is further fueled by other issues plaguing the country.

The protesters expressed their anger over the economic situation in Israel, which remains in a deep recession with soaring unemployment surpassing 20 percent recently.

Another hot topic is the government’s handling of the coronavirus crisis. This week, the total number of Covid-19 cases reached over 100,000 – arguably quite a large number for a nation of 9 million people. 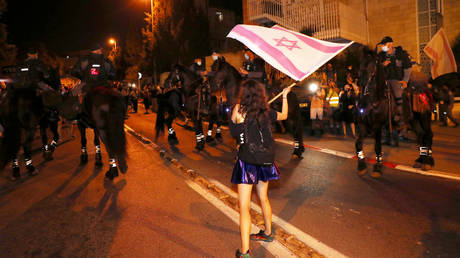