If Tel Aviv goes ahead with its plan to annex parts of the West Bank, the region is set to see a new, all-out uprising of Palestinians backed by most of the Arab world, warned an aide to the Palestinian Authority president.

“When things flare up and it becomes a fully fledged intifada, we will see a combination of forces between Gaza and the West Bank,” Nabil Shaath, a senior adviser to President Mahmoud Abbas, told France24 Arabic. And the new uprising is likely to receive broad financial support from the Arab world, the official said.

This week, the two rival Palestinian factions – Gaza Strip-governing Hamas, and Fatah, which is in charge of the West Bank – pledged a joint campaign against Israel’s annexation plan. Earlier, Abbas withdrew from security agreements with Israel over the impending land grab, removing the legal obstacles impeding those willing to take part in anti-Israeli violence.

While the co-existence of the Israelis and the Palestinians has never been particularly peaceful, any major flare-up or sustained uprising is referred to as an ‘intifada.’ The first lasted from 1987 to 1993, and resulted in the deaths of 2,000 Palestinians and nearly 300 Israelis, both civilians and security personnel. The second, which occurred in the early 2000s, was even bloodier, leaving 3,000 Palestinians and more than 1,000 Israelis dead.

The annexation plan, championed by PM Benjamin Netanyahu, envisages the incorporation of all the Jewish settlements in the occupied West Bank into Israel. More than 460,000 Jews live in these settlements, built in violation of international laws, and the annexation will strip the Palestinians of a significant chunk of their territory.

The plan was expected to be put in motion on July 1, but the target date was missed, as Israel was unable to secure a formal sanction for its land grab from Washington.

Israel’s closest ally, the US, maintains it’s Israel’s ‘choice’ whether or not to annex the Palestinian Territories and didn’t openly endorse the plans. The vast majority of the international community, however, strongly rejected the annexation, with even US allies – namely the EU – threatening sanctions against Tel Aviv. 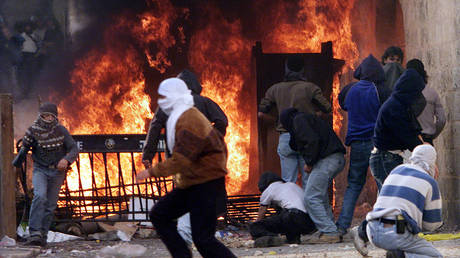 Chancellor Rishi Sunak to pump in...