The commander of Israel’s Air Force has ordered the immediate grounding of its fleet of Yanshuf helicopters from training and transport activities, as technicians try to determine the cause of recent motor issues.

The grounding comes about a month after a motor in one chopper stopped working in mid-air while IDF Chief of Staff Aviv Kochavi was on board, the Times of Israel reported.

The IDF said after that incident occurred that the immediate actions of the flight crew had meant they could handle the malfunction safely “and at no time was there a threat to the lives of the passengers.”

The military said on Monday that the fleet of Black Hawk aircraft was now being grounded for all non-operational flights after they suffered a number of malfunctions “over the past two months.” Until the end of the investigation into the problems, the fleet will be grounded, the IDF said on Twitter, save for combat operations.

Air Force chief Major General Amikam Norkin grounded the military’s aging fleet of Yasur heavy transport helicopters last year, after one of those aircraft made a crash landing and caught fire due to a malfunction. 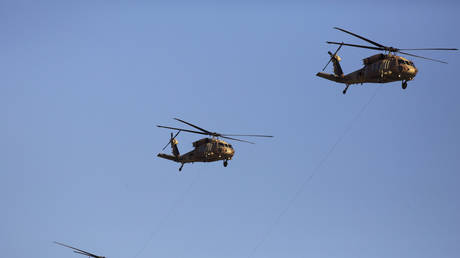