The Israeli military struck several Hamas targets in Gaza, including an alleged elite “special forces” unit, in response to rocket and explosive balloon attacks – the seventh consecutive day of strikes on the Palestinian enclave.

The late-night air raids reportedly targeted sites south of Gaza City on Tuesday, among them a Hamas special forces command post, according to the Israeli Defense Forces (IDF), who said the operations came in retaliation for attacks launched from Gaza earlier in the day.

“A rocket and explosive balloons were launched from Gaza into Israel today. In response, we struck Hamas terror targets in Gaza, including a military compound belonging to one of Hamas’ special arrays,” the IDF said in a tweet, adding “Hamas will bear the consequences for terror activity against Israeli civilians.”

A rocket & explosive balloons were launched from Gaza into Israel today. In response, we struck Hamas terror targets in Gaza, including a military compound belonging to one of Hamas’ special arrays.

Hamas will bear the consequences for terror activity against Israeli civilians.

While there were no reports of damage or injuries in the Israeli raid, photos and videos have circulated on social media purporting to show the strikes in progress, in which bright blasts and columns of smoke could be seen over the horizon.

An attack by the Israeli occupation air force south of #Gaza City. pic.twitter.com/PxuT4W9h0W

Another video of one of the IDF strikes against Hamas military compound in al-Zeitoun, Gaza. pic.twitter.com/iDtpMLTpi1

The rocket attack launched from Gaza earlier on Tuesday apparently landed in an open field near Ashkelon, setting off sirens in the city and sending thousands fleeing to bomb shelters, according to the Times of Israel. No injuries were reported in the incident.

One more video of an IDF strike against a Hamas position a short while ago. #Gaza pic.twitter.com/6twFVf5J5q

Smoke and flames rise after war planes belonging to the Israeli army carried out airstrikes over Gaza City. pic.twitter.com/DqPKqnRS7O

A string of incendiary and explosive balloon attacks launched into Israel have also prompted repeated retaliatory strikes from Tel Aviv over the last week. Though the balloons have inflicted few serious injuries and little damage, they have ignited dozens of brush fires, some of them affecting farmland, and the IDF has vowed to respond to continued attacks.

The recent spike in tensions between Tel Aviv and the Hamas militant group – which has governed Gaza since 2006 – has brought Egypt into the fold, with Cairo sending a delegation to the Strip to mediate talks between the two sides earlier this week. The negotiations have yet to produce results, however, as hostilities continue to soar. In addition to its military operations, over the last week Israel has halted fuel shipments into Gaza, closed a key border crossing and shut down a major offshore fishing zone in the Palestinian territory. 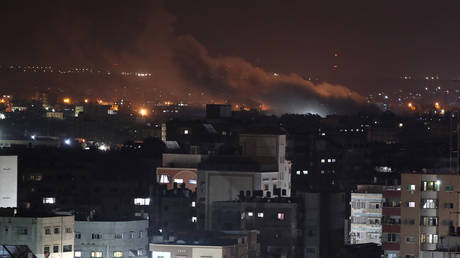 Non-League football fans should be...