Israel has registered its highest daily tally of new Covid cases so far since the start of the pandemic, with the single-day caseload surpassing 10,900 for the first time just as schools are set to open their doors to students.

On Tuesday, Israel registered 10,947 new Covid infections after 137,410 tests were taken over the previous 24 hours. It is the highest figure the Jewish state has seen since it registered some 10,100 cases in mid-January during the height of the country’s third Covid wave.

The new record comes as Israel’s youth are poised to return to educational institutions on Wednesday for the new academic year. According to local media, a third of those who tested positive were under the age of 11, while cases among 12-to-18 year-olds made up 15% of new infections. Just 4% of the latest cases were in the over-60 age group.

Israel’s so-called ‘Green pass’, which requires citizens to prove either their viral or vaccination status for entry into public establishments, was extended on Monday to cover teachers, nurses, doctors and caregivers. Staff working in education must present a vaccination certificate, a negative PCR test taken within 72 hours, or proof that they have recently recovered from Covid.

Tel Aviv announced the rollout of a booster scheme to its most vulnerable population at the end of July and has since lowered the eligible age limit four times. The eligibility was expanded on Sunday to include Israelis aged 12 and over.

Over 2.1 million people in Israel have received a third dose of Pfizer-BioNTech’s Covid vaccine – almost a quarter of the eligible population. The percentage of the country’s population that has received a first dose is just over 64%, while almost 59% are double-jabbed.

Since the outbreak of the pandemic, Israel has registered over one million Covid-19 cases and 7,043 fatalities. 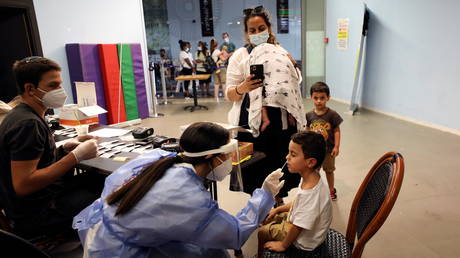 ‘How can you say that about a girl...