President of Israel Reuven Rivlin has said the crown prince of Abu Dhabi will be an honored guest in Jerusalem after Israel and the United Arab Emirates began forging formal ties under a US-sponsored agreement.

“Leadership is measured by its courage and ability to be groundbreaking and far-sighted,” Rivlin wrote in a letter to Sheikh Mohammed bin Zayed al-Nahyan. “I am hopeful,” the Israeli leader penned, “that this step will help build and strengthen the trust between us and the peoples of the region.”

However, Palestine Liberation Organization official Wassel Abu Youssef condemned Rivlin’s invitation, saying “the visit of any Arab official to Jerusalem through the gate of normalization is rejected.”

The deal drew anger and dismay in much of the Arab world and Iran, but a quiet welcome in the Gulf. Palestinians want East Jerusalem to be the capital of the state they seek and have called the agreement a “betrayal” by an Arab country.

Israel’s Intelligence Minister Eli Cohen told Army Radio on Sunday that Bahrain and Oman could be the next Gulf countries to follow the UAE in formalizing ties with the Jewish state.

Bin Abdullah affirmed Oman’s support “to achieve a comprehensive, just and lasting peace in the Middle East and the need to resume the peace process negotiations.” The talks should fulfill the legitimate demands of the Palestinian people “to establish their independent state with East Jerusalem as its capital,” the ministry said. 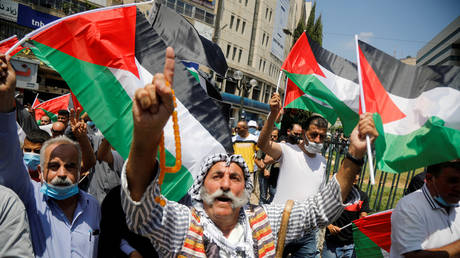