The Israeli Knesset has approved legislation that will ban citizens from protesting more than one kilometer away from their homes, backed by the government as a measure against Covid-19, but decried as draconian by opposition MKs.

Passed 46 to 38 in the early hours of Wednesday morning after a marathon debate in the Knesset, the bill will place sweeping restrictions on demonstrations of any kind, banning citizens from attending protests held more than 1km (0.6 miles) away from their residence. The legislation was approved along with a “special state of emergency,” which will last for only a week before the ministerial cabinet will be required to re-approve the measures.

Standing with the opposition factions, two members of the Blue and White Party – part of the ruling coalition – also voted against the bill, MKs Miki Haimovich and Ram Shefa. The duo was cheered by opposition leader Yair Lapid, who asked in a tweet ahead of the vote: “What’s the next step? Banning the opposition leader from addressing parliament?”

Lapid returned to head up the Yesh Atid Party after a brief stint as a senior Blue and White official last year. There, he worked closely with Benny Gantz, now Israel’s defense chief and “alternative prime minister” under a power-sharing deal reached with PM Benjamin Netanyahu earlier this year.

The new protest restrictions come amid weeks of large demonstrations against Netanyahu, in which citizens have voiced outrage over ongoing lockdown policies implemented to stem the spread of the coronavirus, as well as the PM’s corruption case, over which many have demanded his resignation. The PM has sought to downplay the protests, telling followers in a recent Facebook live appearance that “There have always been protests against me.”

A significant protest was staged outside the Knesset itself on Tuesday, hours before the bill was passed, seeing convoys made up of hundreds of cars descend on the building. Violent scuffles erupted between police and demonstrators after the latter group attempted to hang a banner across the Knesset that said: “using coronavirus to bring dictatorship.” Three people were briefly detained during the fracas, but all have since been released.

🏴🇮🇱 As the Knesset debates banning– or almost banning– protests, this is Israel, Tuesday night pic.twitter.com/9X3Jcv1N89

“You will be responsible for the grave harm that is being done to equality and freedom of the citizens of the State of Israel,” one protest leader said of the lockdowns, addressing the government, according to the Jerusalem Post.

Blue and White MK Michal Cotler-Wunsh has pushed back at those charges, insisting the measures are needed during an “emergency situation,” and vowing that the government would safeguard “necessary checks and balances in democracy.”

With Israel leading in numbers of COVID-19 patients per capita, there must be a proportionate balance between the public’s health and civic rights.

To date, Israel has recorded more than 236,000 coronavirus cases and over 1,500 deaths, according to data gathered by Johns Hopkins University. The country’s extended containment policies come as infection rates remain high, particularly in ultra-Orthodox neighborhoods, where social distancing has been followed less strictly. 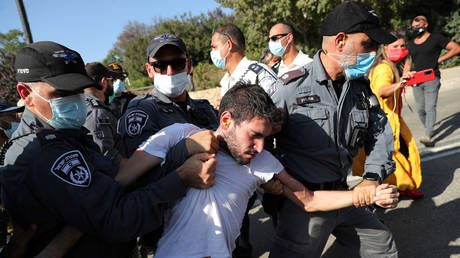 University students WILL be able t...

Did BoJo steal ‘build back better’...