As Israel’s uptake of jabs largely flattens out and school-based infection rates increase, a senior health official has urged adolescents to come forward and be vaccinated against Covid-19.

Speaking to Tel Aviv radio station 103 FM on Monday, Nachman Ash, the country’s national pandemic response coordinator, said he expected the Health Ministry to issue a recommendation for more 12- to 15-year-olds to be vaccinated.

“I think that would certainly be correct at this stage, when we see an outbreak of the Delta variant in the country,” he stated. “We should not wait for higher numbers. We have seen there were quite a few children infected over the last week.”

Health Ministry data shows that the infection rate has increased, with the rolling one-month average moving from 0.1% to 0.3% on Saturday and 0.6% on Monday. Virus cases at two schools last week contributed to that.

Ash’s comments come as the nation’s vaccination rate appears to be flatlining, after a fast start. Around 55% of its 9.3 million people are so far fully inoculated against the virus.

Israel opened vaccinations to adolescents in May, and while the long-term trends are positive, the threat of new variants emerging is still a concern. The Pfizer vaccine, which has been widely used in Israel, has proven to be 79% effective against the Delta variant. 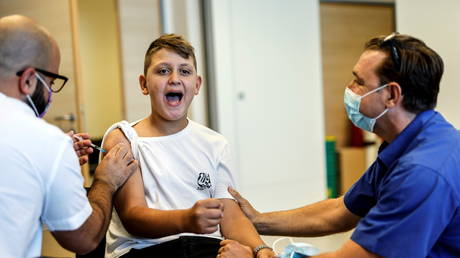