Islamic State (IS, formerly ISIS) has claimed responsibility for an attack on Afghanistan’s capital that left eight dead and several dozen injured, nearly three weeks after it carried out a rampage at Kabul University.

Afghanistan’s Interior Ministry said that a total of 23 rockets hit targets across Kabul.

At least one rocket landed in an office inside the capital’s diplomatic quarter, but it did not explode, according to reports.

In total, eight people were killed and 31 others were injured.

The Taliban denied any links to the attack. Hours later, Islamic State issued a statement taking responsibility for the barrage.

The attack came just hours before US Secretary of State Mike Pompeo was set to meet with Afghan and Taliban negotiators in Qatar, in the hopes of restarting stalled peace talks.

The rocket barrage is just the latest in a series of deadly strikes carried out by Islamic State in the country. At the start of November, IS killed 22 people after gunmen stormed Kabul University. 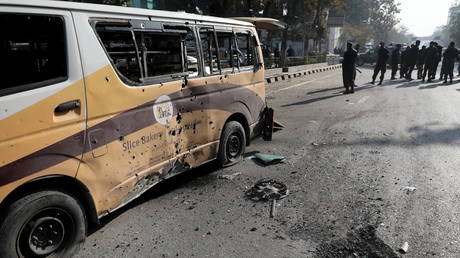