Prominent Iranian nuclear scientist Mohsen Fakhrizadeh was injured in an attack outside the capital Tehran on Friday, and later died in hospital, the country’s Defense Ministry has confirmed.

“Unfortunately, the medical team did not succeed in reviving him, and a few minutes ago, this manager and scientist achieved the high status of martyrdom after years of effort and struggle,” the statement said.

Mohsen Fakhrizadeh-Mahavadi was attacked during an armed clash between his bodyguards and unknown assailants in Absard city, Tehran province, Mehr News reported. The attack involved at least one explosion and a shootout, it added.

The Atomic Energy Organization of Iran first denied the claims, with spokesman Behrouz Kamalvandi saying that all nuclear scientists were “safe.”

Fakhrizadeh and his bodyguard were reportedly targeted by a “suicide” attacker at the entrance of Absard town.

The scientist was struck by gunfire, but before the shootout, his car was stopped by an explosion at Mostafa Khomeini Boulevard, according to IFP news agency. Several others were also reportedly killed in the incident, it added, but the information has not been officially confirmed.

Images released to the press showed the exploded wreckage of one vehicle and a second bullet-marked car, in which the scientist was traveling.

In a tweet, Foreign Minister Javad Zarif said “terrorists murdered an eminent Iranian scientist today,” and accused Israel of playing some part in the killing. 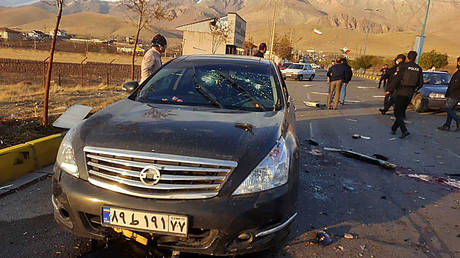