Iran has accumulated a low-enriched uranium stockpile that is 12 times greater than that allowed under the 2015 nuclear deal, the International Atomic Energy Agency (IAEA) said.

A confidential report by the UN nuclear watchdog suggests that the total amount of enriched uranium in Iran’s possession accounts for more than 2.4 tons, AP and Reuters reported, citing papers they saw.

The quantity is about 12 times higher than the limit of 202.8 kilograms set by the Joint Comprehensive Plan of Action (JCPOA) signed between Iran and Russia, China, France, Germany, the UK and EU, also known as the Iranian nuclear deal. The US was a signatory to the deal before the Trump administration withdrew from it in 2018.

The IAEA report also says that the Islamic Republic has been enriching uranium to a purity of up to 4.5 percent, which is also higher than 3.67 percent agreed under the deal.

However, the violation did not just happen overnight: the IAEA has reported on Iran exceeding the agreed limit on enriched uranium stockpiles since at least March.

Tehran previously announced several stages of reducing its commitments under the deal in response to the US’ unilateral withdrawal from the agreement back in 2018. Washington then re-introduced economic sanctions against the Islamic Republic previously lifted under the deal and also imposed new crippling restrictions targeting Iran’s oil sector in particular.

The US pressed its allies into joining the sanctions regime as well, even when the IAEA repeatedly declared Iran in full compliance with the deal. Other parties to the agreement have argued the deal must be saved.

With its latest report, the IAEA said that the Iranian authorities are still granting the agency’s inspectors full access to its nuclear facilities and informing the UN watchdog about its nuclear program developments.

Most recently, Iran informed the IAEA about installing three cascades of advanced uranium enrichments centrifuges to an underground facility under the nuclear site in Natanz. The first cascade has been installed already, according to the report.

However, the agency also expressed its concerns over last year’s discovery of what was described as man-made uranium particles at a site near Tehran that was not declared by Iran.

“Following an assessment of this new information, the agency informed Iran that it continues to consider Iran’s response to be not technically credible,” it said, requesting “a full and prompt explanation.”

The Iranian authorities have repeatedly denied they ever intended to create a nuclear weapon. 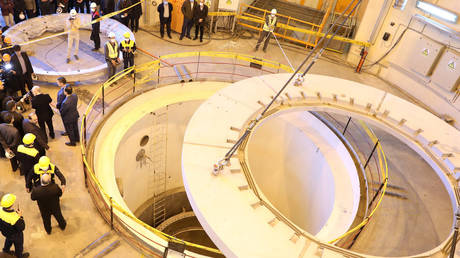