Iran’s President Hassan Rouhani said on Wednesday that Tehran will work to take any “favorable opportunity” to lift sanctions imposed by the US against Iran, hinting such an occasion could arise under a Biden administration.

“Our aim is to lift the pressure of sanctions from the shoulders of our people,” Rouhani told a cabinet meeting. “Wherever this favorable opportunity arises we will act on our responsibilities. No one should miss any opportunity.”

The statement comes as Democrat Joe Biden claims victory over Donald Trump in the US presidential election. During his tenure, Trump has sought to isolate Iran and even withdrew Washington from the Iran nuclear deal in 2018, reimposing a range of sanctions on Tehran. Biden, in contrast, has proposed to offer Iran a “credible path back to diplomacy.”

Rouhani said on Wednesday his administration’s policies were based on the assumption that Trump would stay in office and US sanctions would remain fixed, but he added that it’s possible Washington could “choose a new path” on the issue.

Iran’s president already called on Biden on November 8 to “compensate for past mistakes” and return the US to the 2015 nuclear agreement.

He reiterated the call on Wednesday, saying that Iran was ready for talks with the US, saying: “We should do everything to return our country and peoples to a time between 2016 and 2017, after the nuclear deal and the lifting of sanctions when Iran was experiencing economic growth.”

The president also urged hardliners in Iran not to obstruct his policies. But Tehran also expects Trump to complicate any effort by Biden to return to the nuclear deal, through “sabotage,” according to Rouhani’s counselor Diako Hosseini. “We should be reserved until the new US government takes office in January and not let ourselves be provoked,” Hosseini stressed.

Iran’s supreme leader Ayatollah Ali Khamenei said last week that the result of the US election would not change Tehran’s policies towards Washington. 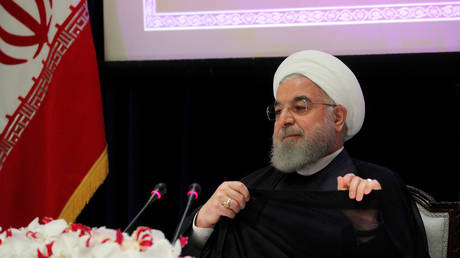