Iran intends to sue the US at the International Court of Justice (ICJ), saying Washington’s sanctions have damaged Tehran’s ability to fight the Covid-19 pandemic.

The intention to initiate litigation was announced by the country’s Vice-President for Legal Affairs Laya Joneydi during a visit to the Pasteur Institute of Iran, which plays a leading role in dealing with the deadly coronavirus.

The ICJ is one of the principle bodies in the United Nations’ system for handling disputes between UN members. Washington refuses to acknowledge its jurisdiction in full since The Hague-based body ordered the US to pay compensation to Nicaragua for waging an undeclared war against the Sandinista government in the 1980s.

The court is already reviewing a lawsuit filed by Iran over sanctions imposed by the Donald Trump administration. In 2018, it ordered the US to lift restrictive measures linked to humanitarian trade, food, medicine and civil aviation. Washington ignored the order and instead scrapped a treaty with Iran, which served as the basis for the Iranian legal case.

The Treaty of Amity, Economic Relations and Consular Rights was signed in 1955, two years after a CIA-backed coup ousted the government of the elected Iranian prime minister, Mohammad Mosaddegh, and survived decades of hostility since the 1979 Islamic Revolution.

Another Iranian lawsuit over assets worth $2 billion that were frozen by the US, which the top UN court is reviewing, stems from alleged violations of the same treaty. In October 2019, the ICJ rejected the US’ claim that it had no jurisdiction over the case and allowed it to proceed.

Iran is among the Middle Eastern countries worst-affected by the Covid-19 pandemic. On Sunday, it reported its worst daily death toll after 163 new fatalities were recorded by health officials. A total of 11,571 people have died in the country from the coronavirus. Tehran says US sanctions, which bar Iran from buying essential medical supplies on the international market, have exacerbated suffering in the country.

The US has imposed numerous rounds of sanctions on Iran under the Trump administration as part of its campaign of “maximum pressure” against Tehran. The US broke a multilateral nuclear deal (the JCPOA) signed under Trump’s predecessor, Barack Obama, to pursue this policy. Washington says its goal is to force Iran behave “like a normal country.” 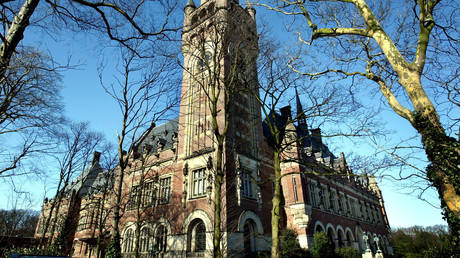 Fire erupts on board of cargo...

Clubbers in Canada’s Quebec as...

Fire erupts on board of cargo ship off Canada’s coast after hazmat containers catch fire, sending toxic fumes in the air