Iran’s health ministry has reported that new Covid-19 infections broke its single-day record for the third day in a row on Wednesday, as total case numbers soared above 4 million amid a spike driven by the Delta variant.

On Wednesday, Iran confirmed 39,357 new infections within the past 24 hours, sending the total number of confirmed coronavirus infections since the start of the pandemic to 4,019,084, according to health ministry data. Over 92,000 people have died from the virus to date in Iran.

The official figures, which some health experts have claimed are underestimated, make Iran the worst-hit nation in the region, as well as giving it the 12th-highest total case number of any country globally.

The concerning case numbers come just days after the health minister, Saeed Namaki, wrote to Supreme Leader Ali Khamenei to express his concerns about the threat posed by the Delta strain and call for an army-enforced two-week long lockdown.

Namaki warned that, if no action is taken, the impact of the virus could be “catastrophic” and “irreversible,” leading to hospitals running out of beds and medical staff to treat patients. The minister’s concerns were reiterated by the heads of 65 medical universities throughout Iran, who backed calls for a lockdown last week.

After receiving the minister’s missive, Khamenei called on the president “to investigate this issue in the Corona national committee and take any action necessary” to contain a fifth wave of infection, according to a statement from his office.

Iran has struggled to import or administer enough vaccines to fully inoculate its adult citizens. So far, while 11 million out of the 83 million-strong population have received one dose of a Covid-19 jab, only 2.8 million are fully vaccinated.

On Wednesday, just one day after taking office, newly inaugurated Iranian President Ebrahim Raisi chaired the country’s Covid-19 task force. However, it’s not yet clear if he will seek to impose a full lockdown across the country, which Iran has so far resisted. 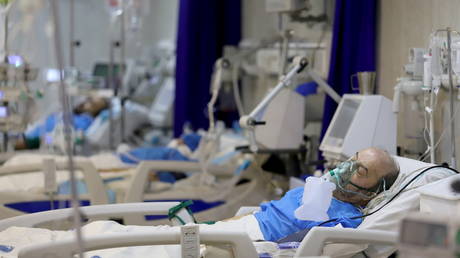 EU signs deal with Novavax for up...