Iranian Foreign Ministry spokesperson Saeed Khatibzadeh announced on Tuesday that talks on reviving the 2015 nuclear deal will resume “in the next few weeks,” after negotiations stalled earlier this year.

The talks, which have been taking place in Vienna, have already gone through five rounds of discussions with no agreement secured, as differences remain between the US and Iran.

Speaking as Foreign Minister Hossein Amir-Abdollahian visits New York for the UN General Assembly meeting, Khatibzadeh confirmed that further talks will “resume soon,” adding that negotiations are expected to begin again “in the next few weeks.”

However, despite the planned upcoming talks, the official rejected a suggestion from France’s foreign minister that signatories of the Joint Comprehensive Plan of Action (JCPOA), known as the Iran nuclear deal, are due to meet on the sidelines of the UN event.

While Iran is not formally discussing the nuclear situation with the JCPOA group, Amir-Abdollahian is to meet with the EU’s foreign policy chief, Josep Borrell, as well as other foreign ministers, including those from France and Germany, during the UN event.

The announcement that negotiations are set to resume comes as the head of the Atomic Energy Organization of Iran, Mohammad Eslami, told Japanese media that the US must remove sanctions imposed on the Islamic Republic for the talks to proceed.

The US has been hesitant to simply lift sanctions imposed by former president Donald Trump, after he withdrew America unilaterally from the JCPOA in 2018, seeking for Iran to first undo its countermeasures – notably, enriching uranium beyond the limits permitted under the deal – taken in response to the sanctions. 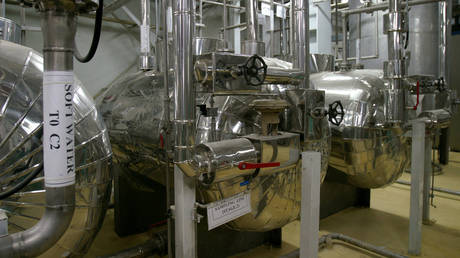 Iran has not ‘boycotted’ retur...