The Iranian judiciary has formed a special committee to locate those behind the January assassination of Quds Force chief Qassem Soleimani, announcing the move just hours before the slaying of a preeminent nuclear scientist.

The new body will be tasked with locating and gathering evidence on individuals directly involved in the US drone strike assassination executed last winter on the territory of Iraq, Deputy Prosecutor General Seyyed Ashrafi said on Friday.

“The committee has been set up given the fact that some of those accused of being involved in the January assassination regularly visit neighboring countries,” said Ashrafi, who was appointed special investigator on the Soleimani case.

He added that legal representatives had been dispatched to six different countries hosting US soldiers or military bases, noting that Iraq had recently prepared a response and would soon submit it through “diplomatic channels,” but did not name the other five nations.

While Tehran previously provided Interpol with at least 35 names of individuals believed to have taken part in the US kill strike, the policing agency declined to act on the information, telling the New York Times it would “not consider requests of [that] nature,” adding that it is “strictly forbidden” to intervene in matters “of a political, military, religious or racial character.” That has left Iran largely on its own in seeking justice for the well-liked general.

‘Criminal act’: Ex-CIA chief urges Iran to wait on ‘return of responsible US leaders’ before reacting to nuclear scientist killing

The creation of the special committee came a mere hours before another high-profile assassination in the country, after a leading nuclear scientist, Mohsen Fakhrizadeh, was killed in an ambush on his car outside of the Iranian capital on Friday. While the perpetrators of the attack have yet to be identified and remain at large, Iranian military officials have vowed “severe revenge” for those behind the murder. 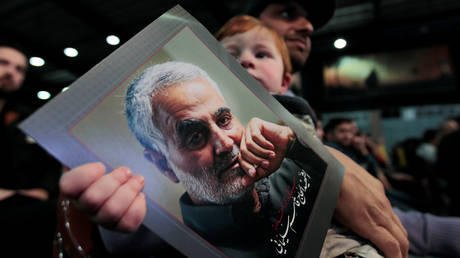 Iran warns US & Israel against...