The Iranian Army has hailed the development of two new pieces of military hardware, a powerful new radar and a weapons command and control system, amid ongoing pressure from the US and its allies.

On Wednesday, a new radar and command and control system were unveiled by the Iranian Army’s air defense forces as the nation looks to enhance its military capabilities with yet more domestically developed hardware. The commander of the air defense force, Brigadier General Alireza Sabahifard, was present for the unveiling.

Iranian three dimensional phased-array radar Alborz. It is stated that Alborz radar has a detection range of up to 450 km and can track up to 300 targets. Judging by its appearance, looks like its further development of the Arash radar. pic.twitter.com/prScAG3Nl6

According to semi-official news agency Mehr, the ‘Alborz’ 3D radar has been developed to deliver long-range-detection capabilities. It is reportedly capable of identifying targets flying at a low altitude and has a maximum range of 450km (280 miles). It can also track up to 300 targets simultaneously.

Meanwhile, the ‘Borhan’ command and control system provides live data to field commanders, allowing them to make decisions based on information from all available sources. It is reported that the system has an effective detection and processing capability, as well as having an inbuilt capacity to deal with electronic disruption.

Iran has pushed forward with the development of indigenous military hardware due to sanctions placed on it by the US and its allies, as well as the perceived need to enhance its defense capabilities.

On Tuesday, the Iranian Army test-fired the latest Mersad-16 missile system in the Dasht-e Kavir desert in the north-central province of Semnan. The trial was reportedly a success and the indigenously developed surface-to-air missile system is now ready for action.

In May, as conflict escalated between Israeli and Palestinian forces, Tehran showed off its latest defense technology, unveiling the ‘Quds’ radar system, a surface-to-air missile system dubbed ‘9-Day’, and a drone called ‘Gaza’ with a 2,000km operating range. 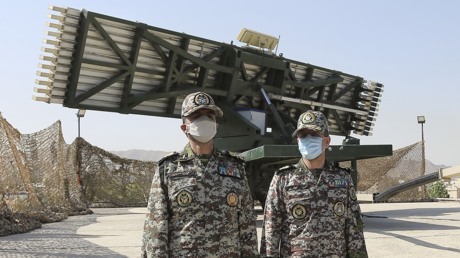