The president of Lebanon has asked the country’s central bank to investigate the Lebanese pound’s record crash against the US dollar, which sparked fiery protests and deepened the country’s existing crises.

“President [Michel] Aoun called on the governor of the central bank of Lebanon to refer the results of the investigation to the public prosecutor,” a statement on the president’s Twitter account said on Wednesday.

On Wednesday, Aoun held talks with the chief of the Banque du Liban, the central bank, to discuss Tuesday’s record currency crash, in which 10,000 Lebanese pounds were worth just US$1.

The presidential statement said that his main concern is to “recover the depositors’ money.”

“Illegal and suspicious practices” have led to the loss of cash deposits, the statement continued, adding that people’s money should not be wasted through “illegal speculation” and “suspicious transfers abroad.”

On Tuesday, news of the financial dive prompted demonstrators to block main roads in the capital, Beirut by torching dumpsters and burning tires. Protests were also held in other areas of the country.

More roadblocks were staged in Beirut and the northern city of Tripoli on Wednesday, while smaller demonstrations took place outside currency exchange shops, according to local media.

Inflated food prices and a lack of hard currency have further devastated Lebanese businesses already hit hard by the pandemic, with around half of the population now living in poverty.

Other protests in recent weeks have focused on alleged corruption by officials and deteriorating living conditions caused by the financial crisis.

Negotiations between Aoun and interim Lebanese Prime Minister Saad al-Hariri to form a government are at a stalemate, meaning a new cabinet has still not been agreed.

Lebanon’s former PM, Hassan Diab, and three ex-ministers were charged with negligence over the blast, which was caused by ammonium nitrate that had been stored at the port in dangerous conditions for years. 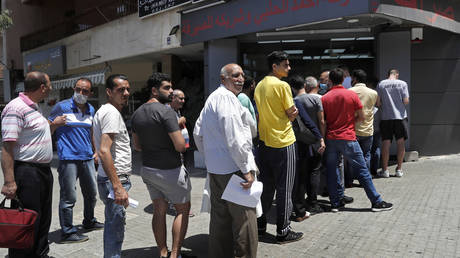