French authorities have opened an investigation after a video was published on social media showing three policemen beating and tear-gassing a black man in his own office.

Speaking on Thursday, Paris prosecutor Rémy Heitz told AFP that he had asked the police inspectorate general to investigate “as quickly as possible” the case of a black music producer, who was beaten by Paris police over the weekend.

CCTV footage, which was published by digital media outlet Loopsider on Thursday morning, shows officers striking the producer repeatedly with their fists, knees and batons after entering his studio without a warrant.

The events took place on Saturday in Paris’s 17th arrondissement and reportedly occurred because the man, known as Michel, was not wearing a mask as he walked to his office.

“This is an extremely important affair in my eyes and that I have been following personally since Saturday… I asked the IGPN to do everything possible so that light is shed as quickly as possible” said Heitz.

Interior Minister Gérald Darmanin said in a tweet on Wednesday that he had asked the police chief to “suspend the police officers concerned as a precaution.”

The three policemen were reportedly forced out of the building before being reinforced by colleagues.

Additional footage taken by neighbors outside the building shows the police throwing tear gas grenades into the studio in an attempt to force Michel outside.

Michel is then seen leaving the studio and confronted by numerous police officers; one is seen pointing a gun in his direction. The victim also says that the police hurled racist abuse at him.

The officers involved reportedly initially claimed that Michael had tried to steal their weapons and provoked their aggression.

French law enforcement came in for criticism earlier in the week, when images emerged of heavy-handed policing after they were ordered to clear a migrant camp in central Paris.

On Tuesday, the French lower house passed a bill giving more powers to the police. The legalization includes a controversial security law that clamps down on the publication of images of on-duty police officers. The bill has drawn big protests in recent weeks. 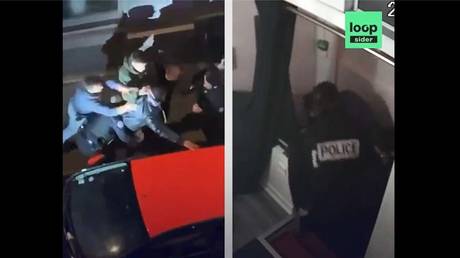 Earth’s atmosphere once as toxic a...