Mexican security officials are investigating a viral video that appears to show heavily armed, uniformed troops in the service of one of the country’s most powerful drug cartels.

Mexico’s Public Security Secretary Alfonso Durazo announced on Saturday that authorities were determining the authenticity of the shocking footage. In the short clip, uniformed men brandish large machine guns and other military-grade weapons as they stand near a long column of armored vehicles bearing the initials of the Jalisco New Generation Cartel (CJNG). The heavily-armed gunmen can be heard shouting allegiance to the Jalisco cartel’s boss, Nemesio Oseguera.

According to reports, the soldiers belong to the cartel’s “special forces” unit and boast equipment comparable to or even more advanced than the weaponry used by the Mexican Army. The video, it has been theorized, is meant as a show of force against President Andres Manuel Lopez Obrador, who recently visited Jalisco, the state where the cartel is headquartered.

I was wondering when we would see another public act of communication by the CJNG, two weeks after the attack on Harfuch

This one, taken yesterday in the Jalisco Sierra as I’m told, is more than clear in its message toward the fed gov: You come after us, and we will strike back. pic.twitter.com/Xnii4z5P8S

The Mexican government appears to be unintimidated by the video, however. In a series of tweets, Durazo dismissed the “staged event” and reassured the public that “there is no criminal group that has the capacity to successfully defy federal security forces.”

The CJNG has spread across Mexico, creating an increasingly large threat to the government. The cartel is accused of attempting to assassinate Mexico City’s police chief last month in an elaborate ambush.

Mexico has seen a string of violent incidents in recent weeks linked to its ongoing battle against the cartels. Some 24 people were killed earlier this month when gunmen stormed a drug rehab clinic in Guanajuato state. 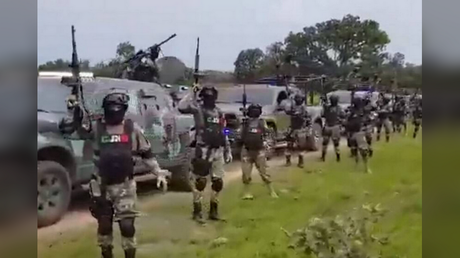