In what could be seen as overreaction, Canberra has floated forcing people to take a Covid-19 vaccine or be barred from entering public places – but then struck an emollient note, saying no one will be mandated to take the jab.

Prime Minister Scott Morrison made some headline-grabbing remarks earlier on Wednesday, telling compatriots that the Covid-19 vaccine is to be “as mandatory as you could possibly make it.” The only exemption from the compulsory vaccination would be for some unspecified “medical grounds,” the premier clarified, speaking to a Melbourne radio station.

Further laying it on thick, Australia’s Deputy Chief Medical Officer, Dr Nick Coatsworth, threatened that any refusal to take the vaccine could come at a cost.

The officials’ alarmist mood managed to raise more than a few eyebrows, given the relatively small scale of the epidemic on Australian soil. The country has reported close to 24,000 coronavirus cases, trailing far behind its neighbors in Southeast Asia – not to mention Canberra’s closest allies the UK, and the US, where the virus has taken the lives of thousands.

In sharp contrast, Australia’s death toll currently stands at 450. For Morrison, however, there’s no reason to be lulled in complacency. “We are talking about a pandemic that has destroyed the global economy and taken the lives of hundreds of thousands all around the world,” he insisted.

Then, all of a sudden, the prime minister walked back the pledge, telling Sydney-based radio station 2GB that Australians will be free to choose whether to vaccinate or not. “It’s not going to be compulsory to have the vaccine,” he exclaimed.

The government lacks mechanisms for making the vaccine mandatory for anyone, Morrison acknowledged: “I mean, we can’t hold someone down and make them take it.” Instead, the government will do its utmost to persuade people into taking the vaccine. The current plan is to immunize 95 percent of Australia’s 25-million population, once the cure arrives.

What we want to achieve is as much vaccination as we possibly can, should the vaccine actually prove successful.

Notably, Morrison was a government minister behind the so-called “no jab, no pay” scheme introduced back in 2015. It stripped people of child care benefits and payments if they refused to vaccinate their child. Australia has recently inked an agreement with AstraZeneca, which is developing a Covid-19 vaccine in collaboration with Oxford University.

The cure, which Morrison described as “one of the most advanced and promising in the world,” will be acquired en masse and made available for free for 25 million Australians. The Oxford vaccine is one of few jabs worldwide currently undergoing Phase III clinical trials. Russia, meanwhile, was the first to register a coronavirus vaccine and has expressed hope that it will become available by early next year. 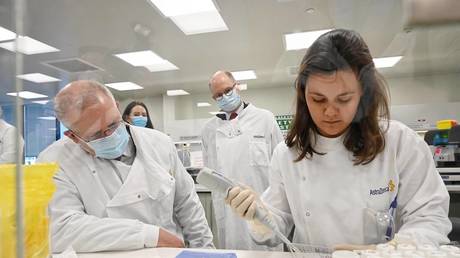 Thousands of GCSE kids could have...