Chancellor Angela Merkel and the leaders of Germany’s 16 states have agreed to prolong the country’s Covid-19 restrictions for at least another four weeks, but made special exemptions for close family and friends on Christmas.

The holidays will be an “important” but “difficult” time for the Germans, Merkel said, announcing the government’s decision as she called on the nation to make “one more” push in the battle against the virus. She called the previous measures, dubbed a “light” lockdown, a “partial success,” but said they were simply not enough.

“The exponential growth of infection numbers has been broken, the steep curve has become a flattened curve,” the chancellor told journalists. “But infection numbers remain at a level that is far too high. The situation doesn’t allow us to lift the measures agreed for November.”

Restaurants, cafes and hotels are to be closed throughout Germany for the next four weeks, while the retail sector will also face further restrictions, the government announced following seven-hour talks with the heads of the federal states.

The number of people from different households that can meet has been further reduced from ten to five, although children under 14 will not be counted under this rule. The government also made an exception for Christmas, allowing “the closest family or friends” to meet with a 10-person cap, excluding children, starting on December 23.

Local and regional authorities can also ban New Year’s Eve fireworks in public places to prevent people from gathering in large groups. Traditional public fireworks, like the one at Berlin’s Brandenburg Gate, have also been called off.

The news comes as the number of recorded coronavirus cases in Germany has increased to more than 961,000, a jump of some 18,633 since Tuesday, according to the Robert Koch Institute. Although the number of daily cases was around 5,000 lower than the peak reported on Friday, Germany also tallied a record Covid-linked death toll increase of 410, bringing the total to 14,771.

Mask-wearing will also be obligatory in all potentially crowded public areas, as well as city centers, Merkel said. “We are still too far away from an incidence of 50 per 100,000 inhabitants over seven days. I remain convinced, and in that we agreed, we still have to aim for this target,” she said, as the government confirmed that the restrictions would be extended until early January. 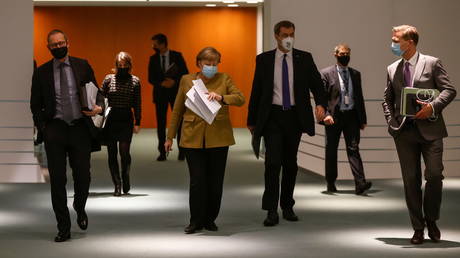