Firefighters are battling a blaze that tore through several industrial buildings outside Tehran. Iran has seen numerous fires and explosions in recent weeks, fueling speculation about possible sabotage.

The fire broke out at an industrial area in Jajrud district in Pardis County, state media said. There are no reported casualties.

Footage published by RT Arabic shows a warehouse consumed by flames, as large billows of smoke fill the air.

Firefighters are still working to contain the blaze. A fire department official told Iranian state TV that they are still trying to determine what caused the inferno.

Iran has been hit by a series of fires and explosions over the past two months. Last week, six fuel trucks erupted in flames in the western Iranian province of Kermanshah. Around 100 firefighters were needed to put out the blaze.

In June, a gas storage facility located near the capital was damaged by an explosion. Earlier that month, a large blast at the Natanz nuclear site reportedly caused significant damage.

The incidents, some of which have yet to be fully explained, have led to theories that saboteurs, possibly Israeli, may be involved. Tehran has not publicly backed such speculation, while Tel Aviv has issued carefully worded statements which neither confirm nor deny involvement. 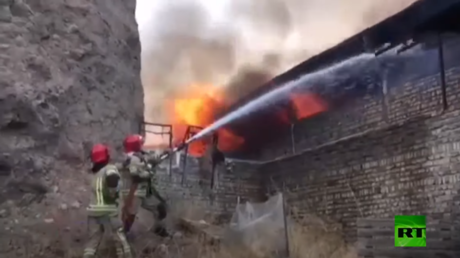 Pentagon vow to use artificial int...